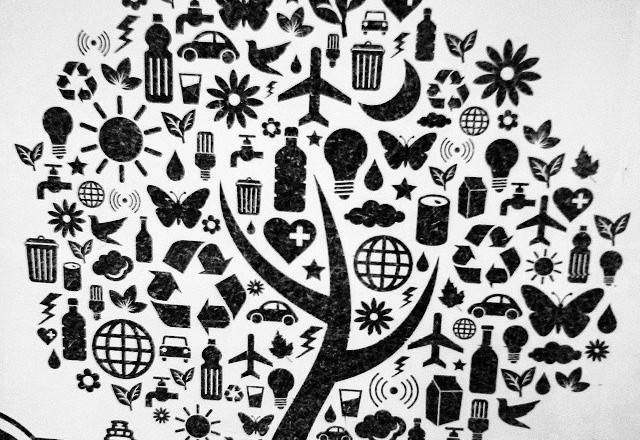 You pull out your phone and swipe right to order a ride. Moments later, a sleek black car pulls up to the curb, and you take your seat. You’re greeted by a lush interior—and no driver. As you cruise to work, you pass a truck carrying all sorts of cargo. The truck has no cockpit; in fact, it has no driver. You’re dropped off at a coffee shop next to your office. You enter the building, and, after a few taps on a monitor in front of you, a hidden machine buzzes to life concocting your dream coffee. You touch your phone to the monitor to pay, grab your coffee, and, as the e-barista emits a robotic salutation, you are on your way.

This is not a description of a horror story where you’re the last human survivor in a wonderfully comfortable world. Instead, it is a description of a world that has undergone the full force of automation—a world which is rapidly approaching. That world is going to raise fundamental questions about our relationship with work, income and what constitutes a complete life in the years to come.

A recent study from the University of Oxford claimed that a whopping 47 percent of human jobs are vulnerable to automation. This kind of structural shift in the workforce is similar to rolling back gender equality in the workplace and returning to a male-dominated workforce. The prospect of automation has begun to enter mainstream consciousness with NPR hosting a tool that shows how vulnerable a certain job is to being automated. Automation will create a displacement of labor unlike any we have ever witnessed before. The third industrial revolution promises to be the first not driven by humans. 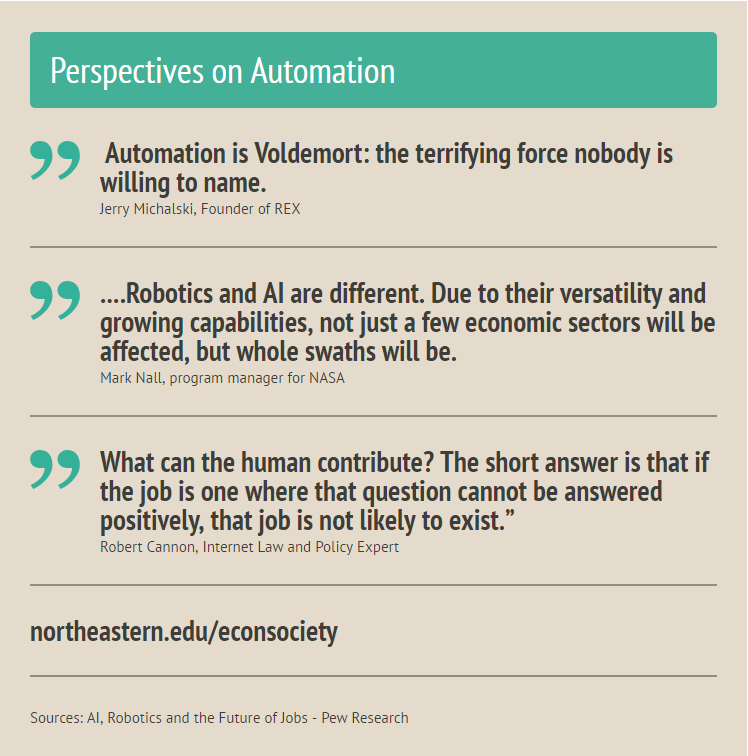 Famed economist John Maynard Keynes called this phenomenon technological unemployment in his 1930 paper Economic Possibilities for our Grandchildren. It has become increasingly clear over the last year that the golden nexus of artificial intelligence, machine learning and advanced robotics is advancing in leaps and bounds. Machine learning has infiltrated increasing swathes of the modern landscape from preventing credit card fraud and deindexing pages on search engines to recognizing who is using a mobile phone. Google’s DeepMind AI project recently demolished the world champion of GO, a highly complex board game, 4-1. Simultaneously, DARPA’s Robotics Challenge is pioneering the development of disaster relief robots while Boston Dynamics has developed a cutting edge line of multiuse highly mobile robots. Most eye-catchingly, Hanson robotics is developing a line of humanoid robots for healthcare and therapeutic roles. Together these trends represent a coming wave of sophisticated, intelligent, highly adaptable robots which will be able to complete an increasing range of tasks.

Meanwhile the realm of transportation is inching ever closer to automation. Amazon is pioneering drone technology for item delivery and driverless cars have been all the rage for some time. The Federal government has already announce preliminary guidance regarding the safe deployment and operation of driverless cars and many states have even more sophisticated legislation on the topic. The impending automation of transport and delivery will be the first salvo in a long, bruising battle with automation. Conceivably the entire supply chain could be automated. Rolls-Royce Holdings PLC is already designing unmanned cargo ships. Once in port these containers can already be unloaded by fully automated crane systems onto automated trucks and sent on for delivery.

These are not long shots, these are coming realities and the continued cannibalization of human jobs by robots will create a wave of displacement that will ripple through the entire workforce. We are already beginning to see the political ramifications of worker displacement, particularly of the blue-collar class which has disproportionately suffered the initial impact of advancing technology. Even if only 10 percent as opposed to 50 percent of jobs are automated, this will cause significant displacement in the workforce.

The answer unfortunately is not simply to reskill displaced workers to become coders, data scientists and more. The nature of these fields and the technologies we have built to support them is that one person labor can be magnified many times over. We continue to build platforms which empower someone with no technical knowledge to launch a website, create media and even write code. This allows someone to launch a business, develop and maintain an online platform and more without any technical knowledge. Similarly, building web product and software systems takes significantly more labor than maintaining it. For us to reskill all these workers with these skills would mean that we would have to be constantly building new software, new algorithms and new techniques on an unprecedented scale. This simply isn’t needed.

Automation will put millions of workers onto the street with nothing to do. This is a recipe for discontent, instability and a revolution. So how do we deal this? Part of the answer is to decouple work from income. The paradigm that has driven human beings since the dawn of civilized living is that work provides income which sustains life. This paradigm has had numerous exceptions, such as passive income or inherited income so living without it is not unprecedented. 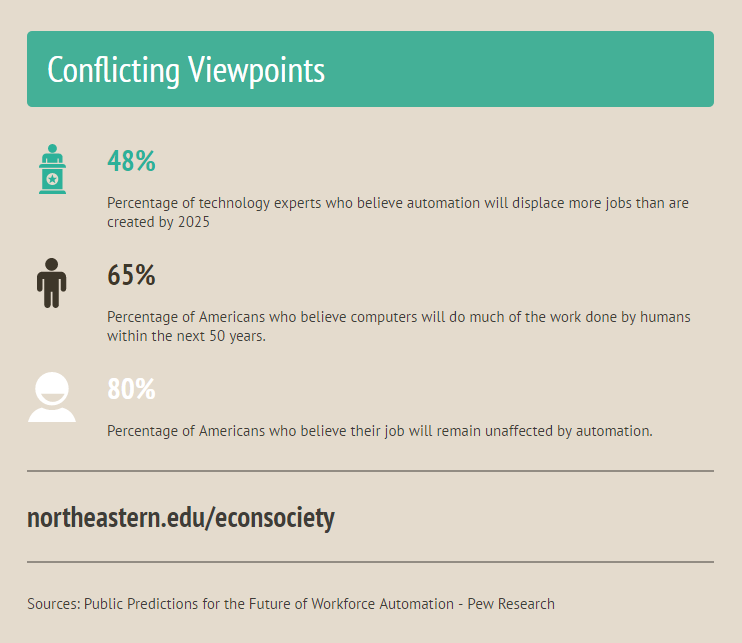 A major thrust of this decoupling involves a universal basic income or UBI. A UBI is an unconditional basic income designed to cover the basic costs of living. Huge controversy is raging around whether a UBI is unconditional and what constitutes basic costs of living. But debate is a major first step in the process. Already several cities across the Netherlands are trialing UBI programs. Meanwhile Switzerland will be the world’s first country to hold a national referendum on introducing a UBI.

The greatest opportunity inherent in UBI is that it will free people up to pursue what they truly love. Everyone has a personal story or knows a close friend who gave up their music, or art or any other passion which lacked promising career prospects. UBI promises to free us to follow these passions and will enrich our societies because of it. Automation could spark a cultural revolution and a wave of worldwide cultural enrichment. This represents an attractive future and is reminiscent of the ethereal, enlightened human beings of the future we often portrayed through TV and film.

UBI will also in one single sweep eliminate poverty. Poverty as it is traditionally defined as earning less than $1 per day. While new definitions would emerge to describe various other kinds of poverty, no one would again lack the basic income to meet their needs. So much of the economic development and policy in the last 25 years (and beyond) has been targeted at empowering and lifting up the world’s poor. Introducing a UBI would allow focus to shift onto other policy priorities, such as climate change.

Adopting a universal basic income is fraught with challenges, some of them particularly difficult. For example, a UBI could easily create a passive, unproductive and completely consumerist population simply content on existing. More worryingly a UBI does not deal with some of the inherent inequalities in education, money management and self-control that often lead to money being spurned and poor economic choices. Finally, what constitutes ‘basic needs’ is a topic of furious debate and a difficult line to draw. Drawing this line at an income sufficient to cover housing, food and clothing but not high enough to cover entertainment would be a good way forward. The desire for entertainment would drive people to continue to work – but in ways they enjoyed. In theory at least.

Combining a UBI program conditional on ‘productive participation’ in society with a reimagined approach to graduate education (such as rapidly growing educational bootcamps) would smooth the transition to a post-work world. A workforce which is able to continually retrain will be efficiently allocated to develop and maintain newer technologies as a UBI is phased in. Adaption to it may take some time but things would settle down and continue to evolve.

An automated world, once the realm of science fiction, is now on our doorstep. Resistance to its job-destroying effects will be fierce, and the political and economic displacement that automation will cause will be unprecedented. The rise of Trump in America on the back of blue collar frustration, a class that has been left behind during America’s globalization, is a stark warning of what could come. But with smart policy moves, iterative education and public enjoyment of the benefits of automation we can build a post-work world truly based on ideas, art and the highest of human values.