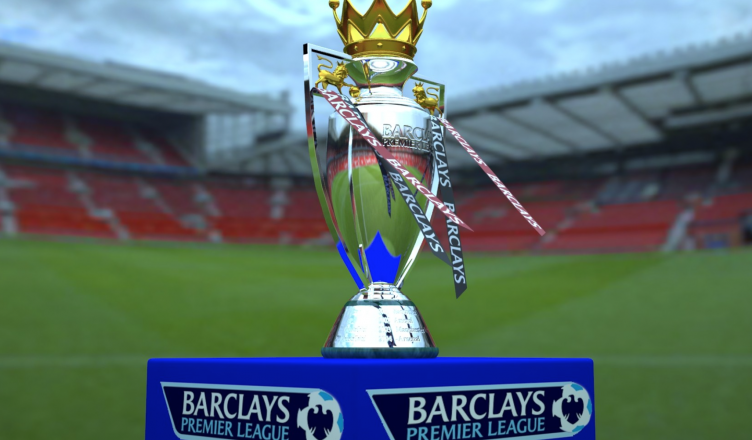 For most shoppers, January is a good time to get a bargain from your favorite store. But, this is not the case for football clubs. In 2002 FIFA, football’s governing body introduced international transfer windows. Instead of clubs being able to buy and sell players at their own accord, the business was confined to two set periods. One window opens during the end of the season, and a second for a month in the middle of the season campaign. For most of Europe, this means transfer deals must be done either in July and August or in January.

The thinking behind having transfer windows is to help provide stability and ensures that smaller teams’ squads are not written off if they begin the season well. And it puts more emphasis on the skill of managers. Once the window closes, they must rely on tactical abilities and motivation, instead of their checkbook to make the team succeed.

The transfer window closed at 11 pm on Monday and as usual, contained some interesting outcomes. Premier League clubs spent £175m in the January 2016 transfer window, the biggest January window for five years, according to an analysis by Deloitte, a business advisory firm. The total gross spending by Premier League clubs for the 2015/16 season also achieved a record high in spending. During the 2015 summer transfer window, £870m was spent, making the total for the 2015/16 season £1.045bn.  This surpasses the previous record of £965m, set during the 2014/15 season.

Dan Jones, a partner in the Sports Business Group at Deloitte took mention that in contrast to previous seasons, this January’s spending has been driven in large part by clubs in the bottom half of the table. The promise of the new broadcast deal for Premier League clubs from next season onwards and the threat of missing out on this revenue stream through relegation is contributing to clubs investing in an attempt to stay in the league. The bottom three teams in the Premier league are demoted to the Championship division and the top three teams in the Championship division are promoted to the Premier league. With this year’s title race closer than ever most teams are not taking any chances. The prospect of increased revenue through broadcast deals has encouraged clubs at the lower end of the Premier League to invest during this window. The Championship division has also seen significant spending by clubs aspiring to reach Premier League status with spending totaling around £35m for this January. Most of the Championship clubs purchases came from the top six league positions accounting for around 70% of this spending.

The combined spending by the clubs currently in the bottom six was £90m this January, representing more than half of total Premier League spending for the January window. A contrast to previous years. Last year the clubs that found themselves in the bottom six on transfer deadline day had a gross transfer spend of £20m during the same window, representing less than 20% of the Premier League total in January 2015. 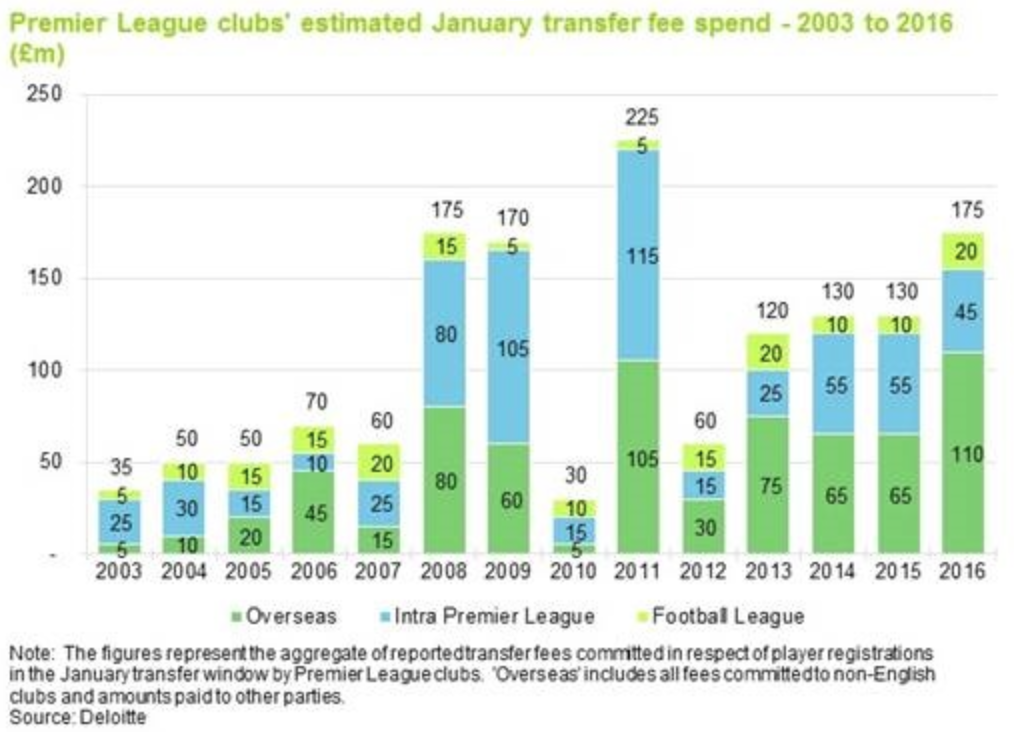 Premier League clubs concluded around £40m of player transfer fees on deadline day. A day usually filled with drama and suspense as teams scramble to make signings, to potentially increase their chances of being competitive in the league. This figure was slightly less than was seen on the January deadline day last year of £45m. Newcastle United, Norwich City and Watford have been the biggest gross spenders in this window, accounting for around 40% of the total transfer spending by Premier League clubs. Stoke City’s £18.3 million capture of French midfielder Giannelli Imbula from Spanish side Porto, concluded late on deadline day, was the biggest deal of the transfer window.

A summary of Premier League clubs’ player transfer fees spending for each of the previous transfer windows 2003-16 can be seen in the chart below. 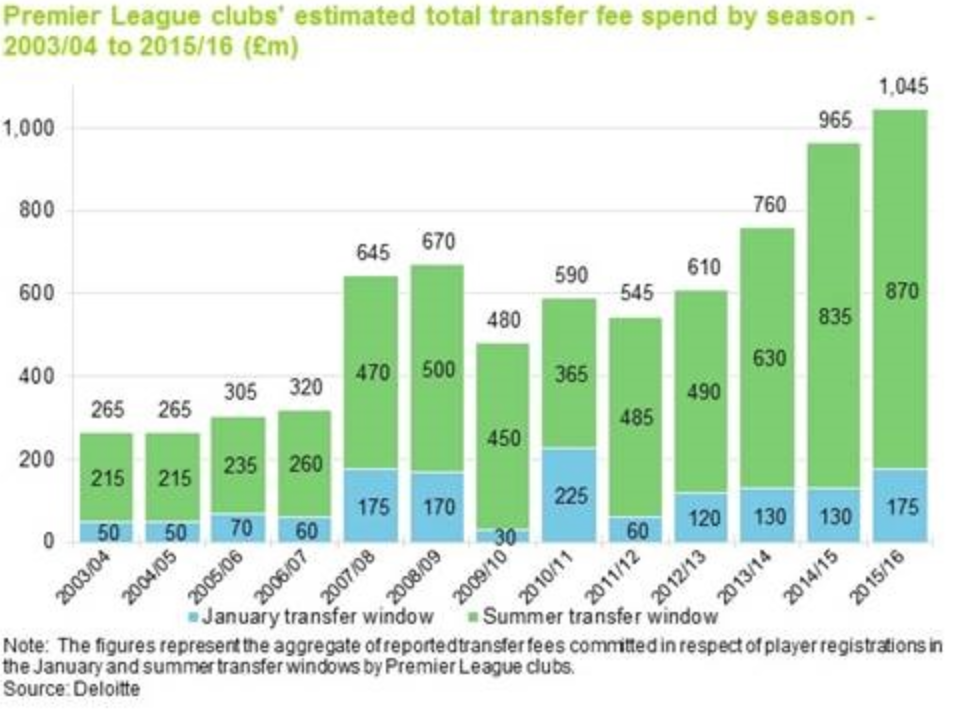