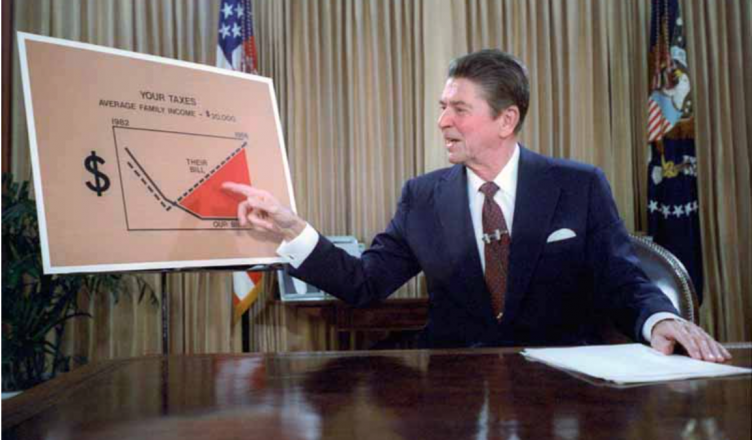 On this week’s Political Economics in Brief, we talk a little bit about “Reaganomics” and the effects that it has had on our country.

Reaganomics is the popular term that refers to the economic policies enacted during President Ronald Reagan’s tenure as Commander-in-Chief. His policies, based on “supply-side economics and the trickle-down theory,” had one major goal in mind: to decrease taxes, especially on corporations. The theory is that “if tax rates are lower, people have an incentive to work more because they get to keep more of the income they earn. They then spend or invest that income, and either of these activities will improve everyone’s prosperity, not just the prosperity of those in the highest income brackets” (Investopedia).

The policies were supposed to shrink the size of the government, keep inflation low, promote fiscal conservatism, and stimulate the economy. Unfortunately, when the economy grew, it was unsustainable. The national debt, along with the budget deficit also grew under Reagan. Even though inflation was kept at a steady 3-4%, and unemployment was down to 5.3%, many of the policies put in place seem to have had a negative effect in the long term. For example, the top tax bracket dropped from 70% to 50%, dramatically decreasing the tax revenue for the federal government.

One problem with this way of thinking is that it appears to millions of Americans that the rich are getting a tax break and the middle class is supposed to pay now in hopes of future prosperity. This relies on the corporations to do the right thing and grow their businesses, stay in the United States, and hire more workers, but it soon became clear that many corporations were just after high profits in the present, not the general well-being of the nation.

Whether President Reagan’s economics policies were good or bad for America, is a contentious topic that will be debated for many years to come. That being said, many of the GOP candidates are still heavily influenced by the policies. Low taxes and government intervention are staples of the Republican Party’s mantra.

If you’re interested in doing more research on the candidate’s policies, check out this link. It is safe to say President Reagan will have his stamp on economic policy for many years to come.