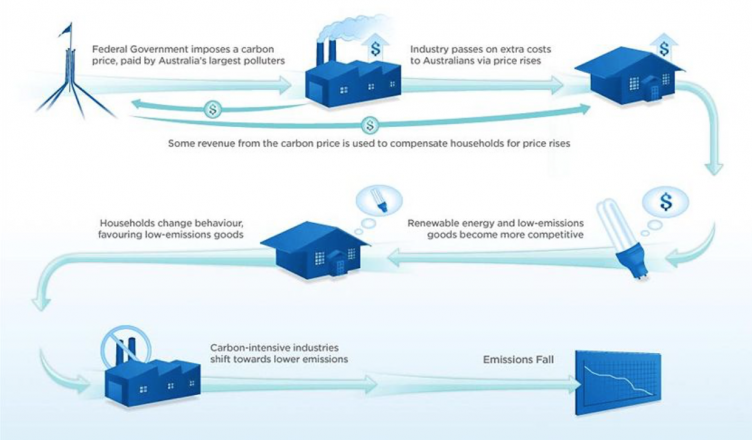 This week, we take a closer look at carbon taxes, which according to dictionary.com, are “tax[es] on the emissions caused by the burning of coal, gas, and oil, aimed at reducing the production of greenhouse gases.” Most recently, President Obama made public his plans to ask Congress to implement a $10-a-barrel oil tax over the next five years. This tax would be used to improve infrastructure, but would also have other benefits to the economy as a whole.

Economists know that carbon taxes work “to internalise the negative externality of carbon emissions,” but what does that really mean?

A carbon tax essentially taxes the production of harmful emissions, like the ones caused by coal, gas, and oil, which will raise the cost of production to the companies that are burning and using fossil fuels, which will also curb the output of the harmful emissions and entice companies to invest in alternative energy sources that are more clean, like solar or wind power, to save money in the long run. The cost of a tax tries to account for the cost to society that the pollution causes.

Most economists prefer carbon taxes to the more popular cap-and-trade method, because it is simple and would be easier to implement effectively.

The benefits of a carbon tax are many. It would raise money to fix the nation’s infrastructure, lower fossil fuels emissions, and spur investment in the renewable energy sector.

The disadvantages are that it would raise the price of fossil fuels for consumers, but with oil being close to $30 per barrel, now is a better time than any for the government to impose a tax like this. Other disadvantages include that it is difficult to measure how much carbon is really emitted and that companies can leave the US and set up factories in places like China, which have little-to-no regulation regarding emissions.

While presidential candidates pitch their environmental plans over the next few months, listen to see if any mention a carbon tax to help reduce carbon emissions or to help rebuild the nation’s infrastructure.