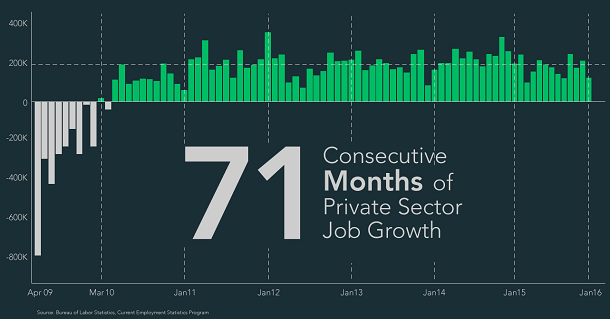 Every month on Friday the Department of Labor releases a report on the state of Employment in the US, commonly known as the “Jobs Report”.

Last Friday’s report showed a slowdown in employment growth in the US. While the unemployment rate fell to 4.9%, its lowest level since 2008. The front-page indicator has fallen greatly from it’s 10% level at the end of the recession in 2009. These numbers tell us that the US economy is getting closer to what economists would consider full employment as expressed by Jeremy Schwartz of Credit Suisse.

Although a broader measure of unemployment that includes Americans stuck in part-time jobs or too discouraged to look for work was 9.9% last month, a level which hasn’t changed much from the fall.

151,000 new jobs were created in January with the gains occurring in several industries, led by retail trade, food services and drinking places, health care, and manufacturing. Yet this number is much lower than last year at the same period with 228,000 employment added. Employment declined in private educational services, transportation and warehousing, and mining.

From December, wages augmented by 12-cents to $25.39, which is a 2.5% increase from the same period last year. It’s a pace that could reassure central bankers that overall inflation will return to a healthier level with a tightening labor market.

Now the regards are turned to the FED, which still has one more report to digest before the next FOMC meeting. But as stated by Jason Schenker of Prestige Economics, “Since the Fed’s dual mandate is to foster full employment and keep inflation at 2%, this report was both weaker than expectations in terms of job gains and supportive of a potential Fed rate hike in March, because of the drop in the unemployment rate.”