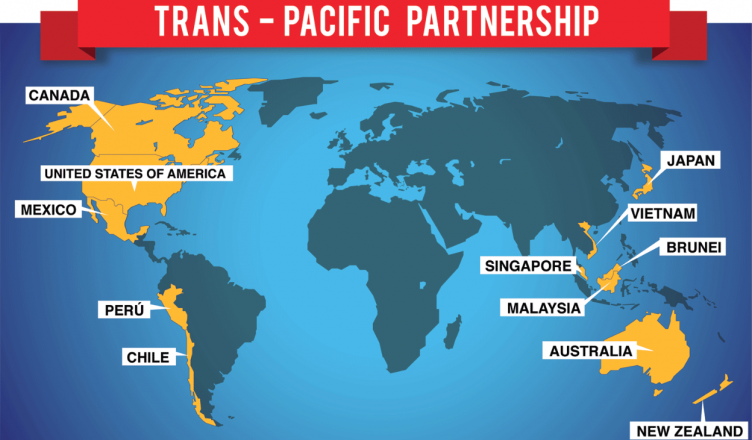 If you happened to miss our previous, more in-depth article on the Trans-Pacific Partnership, check it out after this week’s edition of “Political Economics in Brief.”

The Trans-Pacific Partnership, also known as the TPP, is a trade agreement between twelve countries that is supposed to promote economic growth and free-trade. The United States joins 11 other nations in an agreement that has taken over ten years to negotiate.

This trade deal, forged almost entirely away from the public eye, has come under scrutiny from many political candidates over this election season. The lack of transparency, as well as fears that it will damage the American economy, have raised causes for concern.

Secretary Hillary Clinton, once a champion of the TPP, has recently come out against the agreement in the first democratic debate, saying, “I did say, when I was Secretary of State, three years ago, that I hoped it would be the gold standard. It was just finally negotiated last week, and in looking at it, it didn’t meet my standards.”

Senator Bernie Sanders has also come out on Twitter against the deal saying, “We need trade policies that promote the interests of American workers not just the CEOs of corporations #StopTPP”

The frontrunners in the GOP race, Senator Ted Cruz and business mogul Donald Trump, have also criticized the TPP over the last year or so. Have we finally found an area that both Republicans and Democrats agree on?

Of course not…Ohio Governor John Kasich openly supports the Partnership because he feels that “it’s critical to [the nation], not only for economic reasons and for jobs, because there are so many people who are connected to getting jobs because of trade, but it allows [the United States] to create not only economy alliances, but also potentially strategic alliances against the Chinese.”

Also, Senator Marco Rubio, who, like Secretary Clinton, used to support the agreement, has backed away from his staunch support over the recent months.

Foreign affairs are always an important aspect of every election, and with the economy recovering slower than anticipated, and a lack of confidence in world markets, this election is shaping up to be heavily focused on topics like the TPP.