When humans view objects in a visual scene, they tend to perceive the object borders as “belonging to” the object that occludes or is in front of others. In this context, the figure defines the object that appears in front of the others (the ground). Recently, single cells have been identified in primate visual areas V1, V2, and V4 that have border-ownership selectivity. Interestingly, these cells typically possess very small receptive fields relative to the size of objects in the visual scene about which the cells signal information about figure-ground segregation. Humans generally require global information about the context of the visual scene to inform figure-ground perception, yet border-ownership cells only have access to local information. 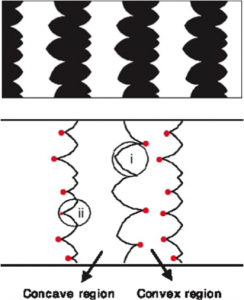 Our model of primate visual areas LGN, V1, V2, and V4 predicts that border-ownership cells acquire information about global scene context through fast feedback via inter-areal connections from cells that have large receptive fields. Units in model area V4, which are sensitive to curvature and have annular receptive fields of different sizes, compete to determine the location of potential figures in the visual scene. This information is dynamically fed back to border-ownership cells sampling the object borders, which in turn locally signal the direction of figure. Local luminance junctions that separate regions of different luminance are thought to convey information about figure-ground segregation. The model yields results in scenes containing T-, X-, and L-junctions that are consistent with human percepts without specialized junction-detectors. Attention interfaces with units in model area V4 to multiplicatively enhance different potential figures in bistable visual displays.