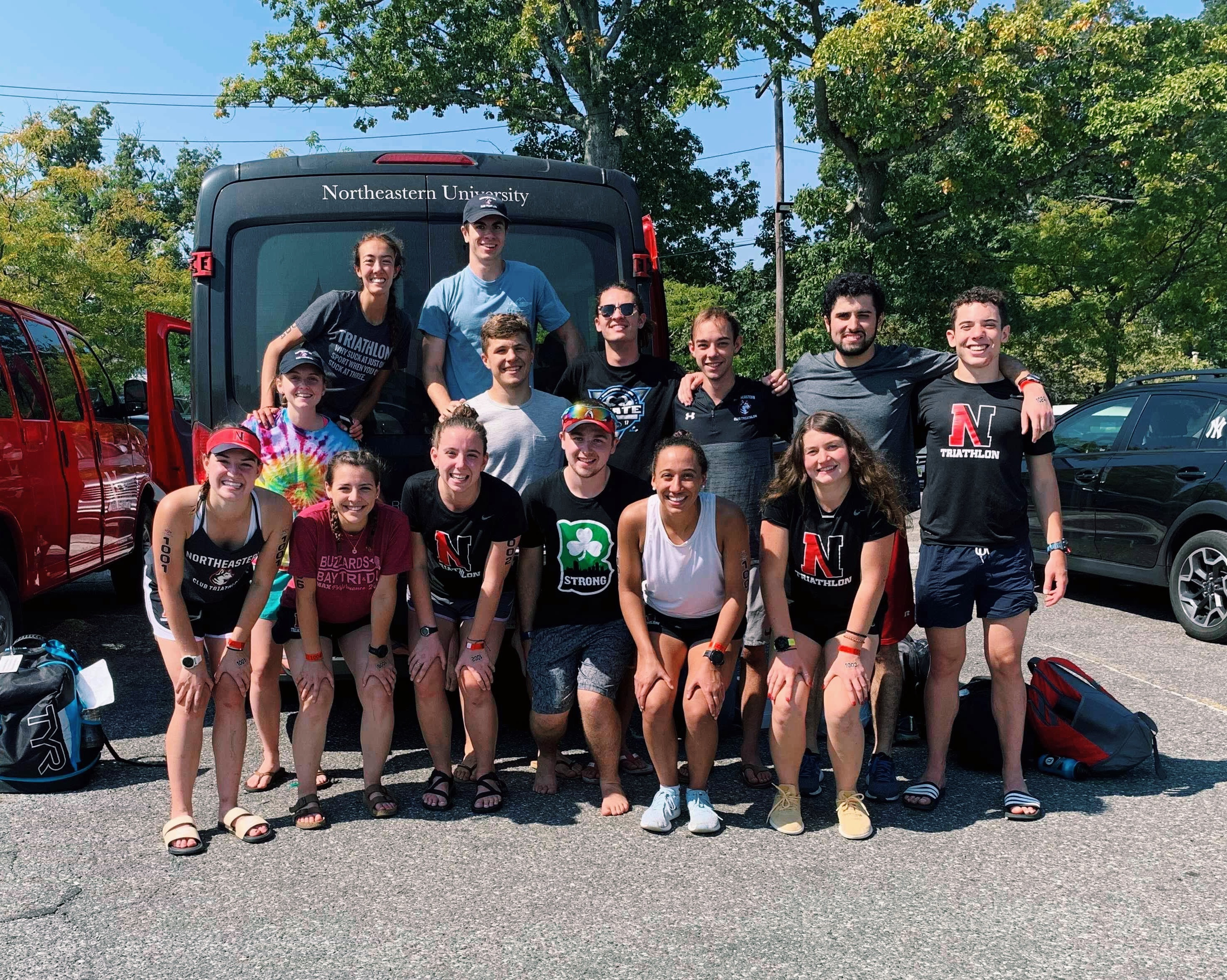 This year, our NECTC season championships were held on Sunday, September 22nd. To prepare for the big day, the team met at 11:45 am in Columbus the day before. One of the two vans provided to us happened to be a Red Eye, meaning that we had to get a little more creative than usual when it came to fitting all the bikes in the van. Michelle and Talia happen to be very skilled at bike Tetris, and we all appreciated their help in fitting over a dozen bikes in one van!

After the bike shenanigans and about a 3 hour and 45 minute drive to the course, the team picked up their race packets and were surprised to receive free puffy coats instead of the usual t-shirt!

Next, the team carbo-loaded with some delicious Italian food at Bertucci’s before heading to the hotel. Once there, most of the gang put on their race tattoos and settled down for the night. Some of the team wasted some time by playing “watch the TV logo hit the corner of the screen” for WAY too long before getting to sleep.

On race morning, our team begrudgingly woke up at 4:20 am. By the time the team got ready, checked out and drove to the race course it was about 5:40 am, which allowed to team to watch a very pretty sunrise over the ocean. We were reunited with Leo and his Father at the course, whom we hadn’t seen in a few weeks- miss you already! After setting up transition and attending the pre-race meeting, our racers were off.

The swim, unlike last year, was surprisingly calm. Some racers dealt with the sun in their eyes, but many had super-fast times!

On the bike course, our team ran into quite a bit of trouble. Edward, Matt, Spencer and Victor all had varying degrees of bike issues, including one very bent and nonfunctional derailleur. The course was impressively bumpy and hilly, although the dreaded Claire’s Climb ended up being a lot less of a challenge than the team anticipated. The bagpipes at the top of the climb were given mixed reviews by our team. Despite all the time spent fixing the bikes, everyone moved on to the run eventually.

The run course started with almost a mile on a boardwalk, which gave an opportunity for many teammates to cheer each other on as they ran in opposite direction. From there, the course got a little hillier and we were all grateful for lots of great cheer squads and music along most of the run. Ed was so committed to the racee that he decided to run the course despite being DQ’d on the bike. The majority of the team remembered to roll across the finish in support of ALS, although a few teammates were afflicted with cardio-brain and forgot.

No surprise, Anders and Tommaso were the first for girl and boy on our team to finish, both with fantastic times! The awards process at Westchester is a little slow to say the least, and Anders actually received a trophy from 2018 at this year’s race.

Per usual, post-race food was very necessary. This time, the team decided to stop at Noodles & Co. where they have the pleasure of meeting Morgan’s two tiny dogs (along with her Mom and Dad)! The rest of the way back included lots of music and some very sleepy passengers!

Once the points were tallied, we learned our NECTC Championship ranking.  Our Men’s, Women’s and Overall team scores were all second overall! The only team that was able to get the better of us was West Point. We were less jealous of their team after learning how rigorous the cadets schedule is…we can definitely say we have more fun!