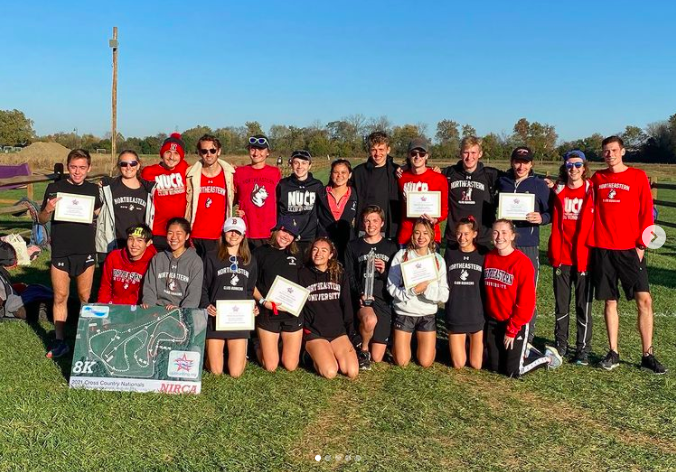 The Northeastern Club Running team won the NIRCA National Championship this past Sunday!

After a dominant season, the NUCR crew joined 40 teams and over 1000 athletes in Shelbyville, Indiana for the 2021 NIRCA National Championships.
The pressure was on and the team did not disappoint!

First and foremost, the men’s team became the 2021 National Champions!!! The crew
was led by Cam Leonard who came in third place and set a new club record with an 8k time of 24:55. Thomas Hinds was the next husky to cross the finish line in 22nd place at 25:56. The next three scorers for the team packed up and finished within seconds of
each other; Brendan Hehir (26:00 at 29th place), Vinny Castronuovo (26:03 at 30th place), and Nicolas Ferretti (26:05 at 31st place).

This pack proved to be enough to put the team on top and the men became the first winning team from the Northeast region with a score of 115 points and an average time of 25:47, the fastest in the team’s history.

On the women’s side, Kathryn McCarthy and Rose McDonnell ran personal bests in the championship race and became NIRCA All-Americans.
Kathryn crossed the line in 20th place with a 6k time of 23:27 and Rose finished soon after in 21st place at 23:28. The women finished 8th place in the team rankings, one of the best in NUCR history.

Kathryn, Rose, Cam, Tom, Brendan, and Vinny all became NIRCA All-American runners with their top-30 finishes making for the most in the team’s history with six!

The depth of the squad was highlighted as Harry Gould and Max Manganiello won their class races with commanding leads, running times of 26:30 and 26:09 respectively. This is the first time any NUCR runner has won their class race! In addition, in the junior/senior men’srace, Matt Petrocelli finished in 5th overall at a time of 26:52. Aleynah Taylor finished 12th overall in the women’s freshman/sophomore race, running a time of 25:56 and Ted Yee secured 12th in the men’s race with a time of 27:26.

The team’s success at Nationals shows how passionate, talented, and resilient the NUCR community has become. NUCR members old and new should feel proud of the running community we’ve built and excited for all that’s to come!