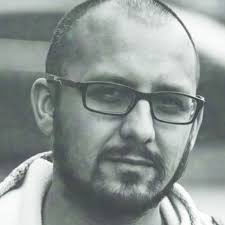 Richard Ramchurn is the creator of The Moment, a science fiction, brain controlled movie where one viewer acts as the “controller” that can shift the film based on what most interests them. The crew for The Moment travels in a caravan showing the film wherever they can, and they showed this film for the vast majority of the festival. 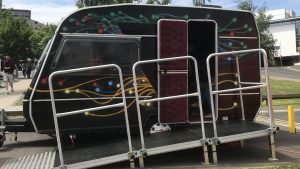 Picture taken by me

Chase: What was your inspiration for creating The Moment?

Richard: It was because of what I was seeing during 2016 with the American election, the British election and with online interactions. These are happening with non human entities, either bots or just people gathering people and focusing on certain groups. I was seeing this happen, but I wasn’t seeing or hearing other people talking about it. There was these huge decisions been made across the world which were influenced by our interference. As I’m a writer, artist and filmmaker, I really want to respond to that in some way, and this may be through my art form. Also, because I’m doing a PhD, I’ve been doing lots of reading about the state-of-the-art brain computer interfaces and the people who are developing this technology. It turns out it’s a lot of the same companies that are developing the technology are allowing these interferences in data across the world. I wrote this story which looked at what would happen if these brain computer interfaces became of age, if they developed a high bandwidth and became ubiquitous, which the FDA did discover that they would be. If we continued on this path as a society of not standing up to or calling out these organizations, what would our world look like? And what would our interactions be like in that world?

Chase: Do you feel like any one group in power inspired this, or was it more the general idea of a society under some control that is the basis for this project?

Richard: Well, I came across like tweets that were definitely not coming from a normal person. It was either from bots or from someone spamming tweets. They were directly made to create anger and disgust at certain groups to dehumanize people. It’s basically psychological warfare. At the time, in 2016, I was following a lot of the beginning of the Cambridge Analytica story. I had known about their psychological operations that have been done overseas as a topple governments, or to be basically caused genocide in certain countries. So I knew that was happening and I was seeing it happening. I was in America at the beginning of 2016, and that idea of a president like that was outrageous I felt that it couldn’t possibly happen. Seeing how this was being changed and the same with what happened in the UK, there was a propagation of lies made. So yeah, there were specific groups that I was referring to. Also, I’m actually finding that the technology is really empowering. It’s quite exciting, but it’s got a massive scope to be misused if it becomes ubiquitous, like a mobile phone of that technology. Everyone is going to have to get more clever about how they shared their data and with how they respond to a media.

One reason why I made a caravan that I can take around the country is to talk to lots of different societal groups. I am bringing people this film because I want people to consider why they get the information that they get. I want them to just be cautious of that information, but also to show them that each film is different, just like each of our own media experiences. Each news feed is based on major metrics that we may not even have control over.

Chase: Do you feel that the user’s control of The Moment accurately affects the level of control that people have over their own lives in society and in what happens politically?

Richard: I’m learning what this system does as I’m going along. I’m playing the little bits where people are seeing more of things that they want to see, not necessarily making a system that would overtake the world. It’s interesting to see how it’s working. There’s a definite link to the social media bubbles that you find yourself in. You follow people with similar interests so that you see only what you like… I feel I am self critical. Perhaps this could be considered something like that, but I don’t think we can control our minds so well in order a fully control this film, especially when you’re on it and interacting with it for the first or second time.

Chase: Do you feel that there are specific plot points or scenes that relate to these politics? Are there specific scenes that are prioritized in the algorithm over others?

There are definitely key scene combinations because I tried to make the meaning happen, not within the scenes themselves, but between pairs of scenes. For example, in the beginning of the film, there’s a militia group that’s walking towards a father and daughter. When you get those two scenes together, there’s a massive building tension. When you see those two films you get a well rounded view of the film. It helps to build up tension and the conflict of the film. It sets both of the main characters off on their journeys. Sometimes when you get a certain combination, a little bit of that tension is lost, but in other moments you get a different perspective on the story.

Chase: I have heard that the cuts in the film primarily happen whenever the user stops paying attention. Is this true?

Richard: The cuts happen, like so: To describe what the tension did it looks like, so over roughly about six seconds, attentional will rise or reach a peak, then drop into a trough, like a sine wave, sometimes bigger or sometimes smaller. I’m not looking at the amplitude of that wave, I’m just looking at when it turns the corner and when it starts to drop. It’s like an attention peak. Basically, if this was a stock graph, the scene shifts when you would sell the stock. The reason I chose that is because I wanted to study how people’s brains react to watching movies. A study was done where they found a correlation between the beginnings and ends of actions. What I want to do with this film is have the user view what they want to view, then cut it when they get bored to create for a viewing experience that is ideal for the user. Anyway, that’s why I put the cut there. Also, I’ve noticed a couple of people mentioning that they get sleepy in the caravan, so when you start to drift off, the scene starts to change, and then [the user] comes back to what’s happening.