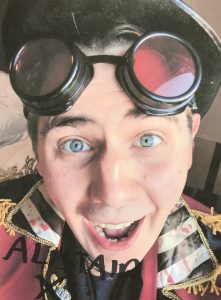 Photo handed to me by Alistair himself after playing one of his games at the show.

Alistair Aitcheson, the creator of The Incredible Playable Show is a mobile game developer, playable installation developer and gaming enthusiast. His live performance show features mini games that include random audience members, but each game involves the entire audience in some way. He showed a demo of his show at the Alternative Realities Summit and had a full show the next day. This interview takes place on the evening of the Summit, the day before the full show. 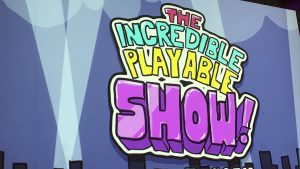 Photo taken at the show by me

Chase: Just to start, what led you to create the game show? What happened that transitioned you into making the game show into a career?

Alistair: It started in 2010, when I graduated from university where I studied math, and then [I made] iPhone and iPad games for a few years. Those became games for big touch screens and then the games became portable installations where I’d get people to run around. The big central idea holding it all together was that I was always gravitating towards social interaction. So the iPad game “Stay” involved multiplayer modes, where people could cheat by grabbing each other or pushing each other out of the way and things. The real reason was because, you know, people enjoy cheating because they could make each other laugh, they could show a side to that personality they didn’t usually get to show, and then when you make the touch screen even bigger, with 27 inch touch screens and stuff. That gets even bigger and you add more people, and the opportunity to make each other laugh becomes an opportunity to perform. People who are usually shy can have an opportunity to make each other laugh. So because of that, I got into this mindset of looking for opportunities to interact, looking for opportunities to get people moving around physically because that encourages them to open up socially, and that turned into a performance. In my first performance game, we had buttons attached to people’s bellies. They were dressed up in morphsuits pretending to be power rangers. The idea was that they were these human buttons which had minds of their own. The player had to play a game using these human buttons which were off doing something completely tangential to what the game is. The response to that is like [what] I’ve ran that at the end of a run of talks at a conference in Berlin. It went down so well because I came away from it going, “Is there a whole show in this?” So I adapted some of my existing games to make them make sense in front of an audience. I created new games and then I started doing prototypes at smaller games festivals until eventually it coalesced into a one hour comedy show, which basically the show as it exists now.

Chase: How did you get from doing a travel like game show to performing here at Sheffield Doc Fest?

Alistair: So I live in Bristol, down in the southwest. There’s a shared working space called the Pervasive Media Studio. They invited me to give a talk about the work I was doing there. I gave a talk around one of the games, like the little preview that I ran this afternoon, and one of the people in the audience really liked it. He dropped in on me after the show. We bounced lots of ideas around. He knew people working doc fest. He came along to see one of my shows and said, “Oh, this’ll be really good for doc fest.” He recommended me to them and then they took a look at the videos and photographs and stuff that I put up and said, “Yeah, you’d be great for this.” And I said, “Thank you very much. I’d love to come.” That’s really the story.

Chase: Do you feel like any of this 360 and VR technology could be incorporated into your show? Do you feel like in the future you could make this into like a VR or 360 video sort of thing?

Alistair: When I see a bit of technology, I always end up gravitating to looking at it from the left field direction. So, you know, you’ve got the 360 video, and the first thought that comes to mind for me is how can I break it? How can I use it in a way a gamer would think, how can I use this object in a literal sense? You know, use an object as it is but not for the purpose it was intended to be used for. The answer to your question is, definitely. I just don’t know what I would do yet because I haven’t had a funny answer to that question. Probably once I do that could very easily become part of the show. I think in terms of a kind of literal, “Could you experience the playable show as a VR experience?” never say never, but my gut feeling is probably not, because the experience is about being physically around each other. You can look each other in the eyes. You’re climbing over each other. The fact that everyone is close together make them want to help each other out and even if you’re not part of one of the games in that you’ve not been given a role, people can find themselves a role because they become human obstacles or they can shout out clues and all that stuff happens because the technology is really just providing a goal. It’s providing a goal and it’s providing an input system. But all the real interaction is happening outside of the screen. All of the energy in the room comes from the fact that people can look each other in the eye, that people can do stuff that the computer has no idea what it is. I wouldn’t like [to include VR and get rid of player interaction]. I wouldn’t like to take that away, but then again, never say never. Maybe I’ll find something where I go, “Oh God, that’s the thing.” And that will become the start of a new game or a new show.

Alistair: Over the course of the show, there’s various roles for people and what I try to do is make sure that everybody in the room has an opportunity to, to do something that means that the show would have been different if they weren’t there. So they get to make their mark and be part of what makes it unique as an experience. That comes in all different directions, such as being one of the people wearing barcode jackets, for example. It’s a passive role and yet you have the experience or shouting out to the person who’s playing. But there’s also opportunities to show off and improvise by shouting out funny things. As a host, I want people to mess around with me. I want people to try and make jokes at my expense. There’s no such thing as a heckler, everybody’s contributing something. Shouting out things just to be funny becomes part of the experience. One of the games is competitive where there’s two teams, but it’s fairly loosely decided who’s on which team, so people can switch if they want by throwing inflatables around. You can have fun with that regardless, you don’t have to be helping a team or hindering a team to be able to find some fun interaction. There’s a lot of things that you can do with an inflatable donut which are, in themselves, just funny. My hope is that the show is a whole creates a space for those moments.

Chase: Do you ever feel that there are moments that you don’t expect that happened that create any big issues with the show? How have you dealt with it?

Alistair: I have that happen all the time. Fortunately over time the magnitude has generally gotten lower, which is good, but there’s always something that goes wrong. I think like that’s actually fine if you get material and if you can make a joke out of it or if you can bounce off of it. I can’t think of an example but I could in the moment. In general, it doesn’t really worry me. I have had instances where, in the early days in particular something would go wrong and it would derail things and I guess you learn how to deal with that in a very loose kind of way. So one example is children. The first performances I did were, in most instances, for kids. I didn’t really know how to interact with them, and the the games devolved into chaos by the end. It’s a very unsatisfying experience. They weren’t able to play the game properly because they’re always in competition with the other kids. It takes one kid to decide, “Oh, I know what to do,” and they just do it over and over, which is actually what most kids will do if they think they figured it out, as far as I’m concerned. That’s Gospel. And the thing I had to take away from that is to learn how to interact with children, learn how not to set up expectations. I’m not to give them a chance to fiddle with the props until I’ve introduced what they actually supposed to do with it. With the adults. I can kind of play jokes and give people a prompt where they have no idea what to do for it. They look confused for a while, and that was funny. But with the kids, you give them a prompt and they start playing with it, very quickly making a decision, thinking, “Oh, this is how I win!” and at that point you’ve lost them. Yeah, how do you roll with that? You try your best and you learn from experience.