Host of the Incredible Playable Show 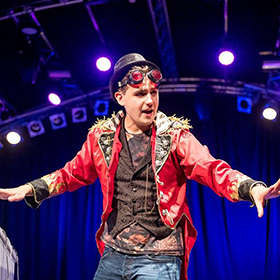 In the time that you’ve performed your act, who has been your toughest crowd?

The toughest crowd I’ve dealt with is kids. I’m very confident in my ability to deal with audiences full of children now, but that is a learned confidence. The first time I ran the show with kids it was very, very difficult. The thing that I didn’t understand about children going into the show was the fact that if you give a child something to hold like a prop – especially if it’s an interactive prop – they will automatically fiddle around with it. Having fiddled around with it, they will very quickly decide what they are supposed to do with it.

Is fiddling around with the props where kids differ from adults?

Both parties fiddle with the props, but this becomes a problem because, when it comes to kids, games are about winning. There is a whole kind of meta-contexting of yes there’s a concept of winning, but really these props are just meant to be silly fun. This is an assumption that adults make right off the bat, but kids don’t. This was a problem that manifested itself during my first show I did with kids. At the start of the show, all of the kids were figuring out their own ways of how they were supposed to win. Once they thought they had figured out, those rules became gospel and they refused to take any other suggestions – especially not from another kid. As a result, a couple of the games just descended into arguments and that was not a pleasant experience.

What game were you trying to get the kids to play?

There is a code breaking game that I had set up that required 4 volunteers to operate 4 buttons. 8 kids decided that they were participating and rushed to the stage. As the host of the show, I take a very “yes, and…” approach to the show and it is my job to make the show work to incorporate everyone that wants to participate. If 8 players want to do it, then 8 players will. Once they got on stage, they all started arguing over which player would control each button, all while mashing the buttons in front of them. Meanwhile, things are happening on the screen as they hammer away at the wrong buttons, which makes the kids think they’re doing something right. In reality, the game is freaking out and saying “lost life, lost life, lost life… game over” and that cycle would continue to repeat itself over and over.

How did you manage to fix everything?

One kid eventually said “no no no we’re not meant to do it like that!” Thankfully he said something because I couldn’t get a word in with them. He started telling the other kids that they were meant to look up at the screen and eventually manages to calm down all of the others. They all finally stop yelling until one kid decides that he doesn’t like being told what to do by another kid and then he just “bam bam bam!” hits the same button as hard as he can again. I basically created a “Lord of the Flies” situation on stage.

What were the takeaways you got from that experience?

The thing I learned from that was the difference between playing with kids and playing with adults. When you’re doing a show with adults, you can make a big deal about giving someone a prop and they have no idea what to do with it, so they await instructions with confusion on their face. That confusion opens up some opportunity for some fun and makes it part of the experience. When you do that same idea with kids, you have to introduce the idea of the prop, what it does, and the concept of the game prior to giving them anything. You need to set the expectations beforehand. If you don’t set up the expectations, they will and that’s when the show descends into anarchy.