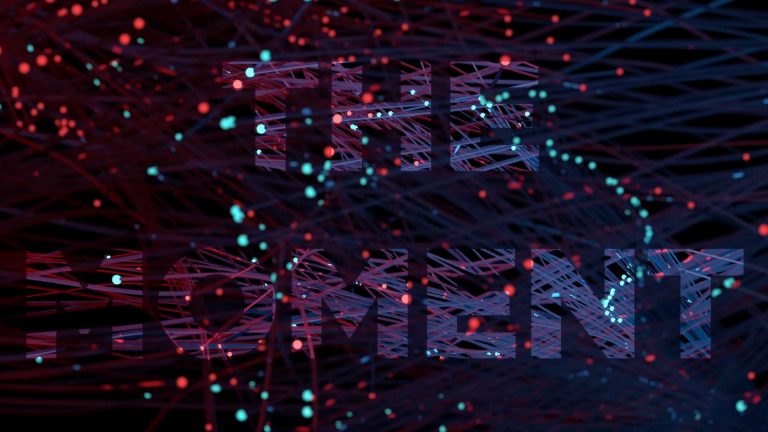 The Moment is one of the world’s first “brain controlled movies”, as its creator Richard Ramchurn likes to refer to it. It is currently viewable on tour in a specially outfitted caravan. It made its premiere at the Sheffield International Documentary Festival, though it is the second of it second created by Ramchurn. When booking a chance to view the 45 minute piece, one individual takes the role of the “controller”, with up to 6 others having the opportunity to fit in the caravan and view the piece (though admittedly, it can get a bit hot and stuffy in there). The controller wears a small lightweight headset with scans their brain to track their attention levels. By tracking which characters and visuals peak the interest of the controller, the movie cuts back and forth between sequences which are in a way, best fitted to its audience. Initially, this can be quite disorienting, as having so many jump cuts with a mixture of audio sources doesn’t construct what would be considered a classical narrative, but as the piece moves forward and learns its audience better, the narrative does tend to smooth out more and form a cohesive storyline. 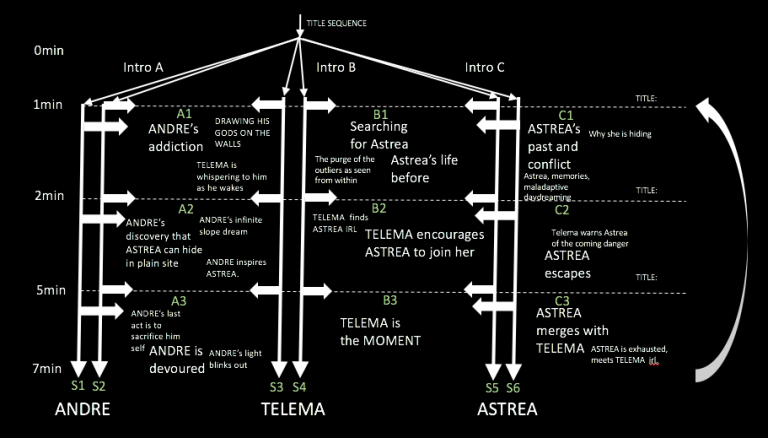 The subject matter of the piece runs along 3 main “paths”, but all exist in the same sci-fi storyworld and interact with each other. In this universe, society has advanced into a dystopian realm, where the majority of its citizens have become part of something called “the moment”.  Though there is no exact historical explanation of what the moment is or how this all happened, it can be inferred that the moment connects people telepathically in a way that seems to, to some degree, remove their free will. Some people are rejected from this neural lace, exiled as “outliers”. Most of the time being an outcast like this is enough to break them, and when it’s not, they are hunted down. People who are a part of it feel themselves as being a part of an eternal, higher consciousness. We have 4 main characters, who I will describe to my best interpretation (but may have some misconceptions about since I have not had the opportunity to view a director’s cut or something similar). Andre attempts to be a part of the moment but is not accepted because he is too individualistic. Hendricks is the leader of a hunting party chasing after exiles. Astrea is a special individual, who seems to be able to hide in plain sight of those who are with “the moment”, and lives life on the run from them after her father is killed. Telema is the digital consciousness representing the moment, who has telepathic conversations with Astrea.

This movie is a form of interactive film like never seen before. While wearing the brain scanning headset, you don’t feel as if you’re in direct control of the piece; you can’t consciously decide to cut to one part or another. But, you do feel that you have some sort of a stake in the film, some sort of agency, in that it does tend to follow that overarching narratives that you find interesting. It feels almost as if the other viewers in the room are getting a glimpse into how your mind works, in a very personal, (and intimidating) manner. With 101 trillion different possible versions of the film you, as the controller, feel a sort of ownership over the exact version that you saw, as it is likely to never be played again. This specific brand of interactivity, though it does not allow for much agency, forces an emotional attachment to the film in a very unique and interesting way.

Of course, the movie is visually stunning as well. Making the most of its sci-fi setting, it is filled with bright neon colors in high contrast to a typically dark and gloomy environment. Given that one of the three paths is entirely digital, it is almost necessary to stylize the live action in this way so that they operate in a similar visual palette. In addition to this, the film cleverly associates certain characters with certain colors, and is synchronized so that the majority of cuts between paths match enough to not be overly jarring to the audience. In addition to switching between videos, the film will at times mix audio such that you can hear the dialogue of one path while watching the visual action of another. This might, if not done properly, overload the viewer with information, but when the film has literally been catered to the audience’s specific interests, this abundance of information comes as a welcome addition.

What truly makes this film work thematically is its use of irony. There you are, with a brain scanner attached to your head, having (probably) happily signed away some consent forms to record your data, and suddenly this narrative builds itself in front of you in which technology has invaded our minds, privacy and free will. In a remote plausible future, you have become the first stepping stone towards this disaster. Suddenly, this film has you looking back at all the other data collected about you online, about all the privacy policies you’ve consented too, and where that’s potentially going to lead us. The film has less of a message, or a specific opinion, so much as it has the purpose of asking you the viewer what your own opinion is on these matter that we typically would spend very little time considering.

Truthfully, this movie can easily be very, very disorienting for the majority of its audience. There is more knowledge and understanding to be gained from each rewatch, but in reality, most people aren’t committed to actually watching a film multiple times. Beyond that even, this caravan is on tour, with only about 10 controller spots open a day. It’s hardly widely know, and it’s even less easily accessible. Personally, I found myself heavily impacted by the message “The Moment” tells, but I am able to admit that I am in the minority. In reality, this movie is more of an experiment for an up and coming medium than it is an artistic piece able to move people significantly.