Review: The Moment and the Unpredictability of “Brain-Controlled” Media

The Moment is a viewing experience unlike any that have come before it. The Moment brands itself as a “brain controlled film.” The controller of the film is fitted with an EEG headset that alters the movie’s storyline, scenes, and cuts according to the user’s subconscious response. The film is hard to describe, given that it changes for each user. I had to privilege of viewing The Moment twice, once as a viewer (without the EEG headset) and again as the controller. The two versions I saw had narrative threads in common, but the comprehensibility, visuals, and even storyline elements varied a remarkable amount between the two viewings.

The Moment is centered on two protagonists that are attempting to hide from an elite government paramilitary force that eliminates “individuals” that refuse to become part of “the Moment,” a government sanctioned, brain-controlled hive mind. In this dystopian, science-fiction world, brain-computer interfaces are the norm; these technologies are both sources of harm and salvation for the protagonists throughout the film. 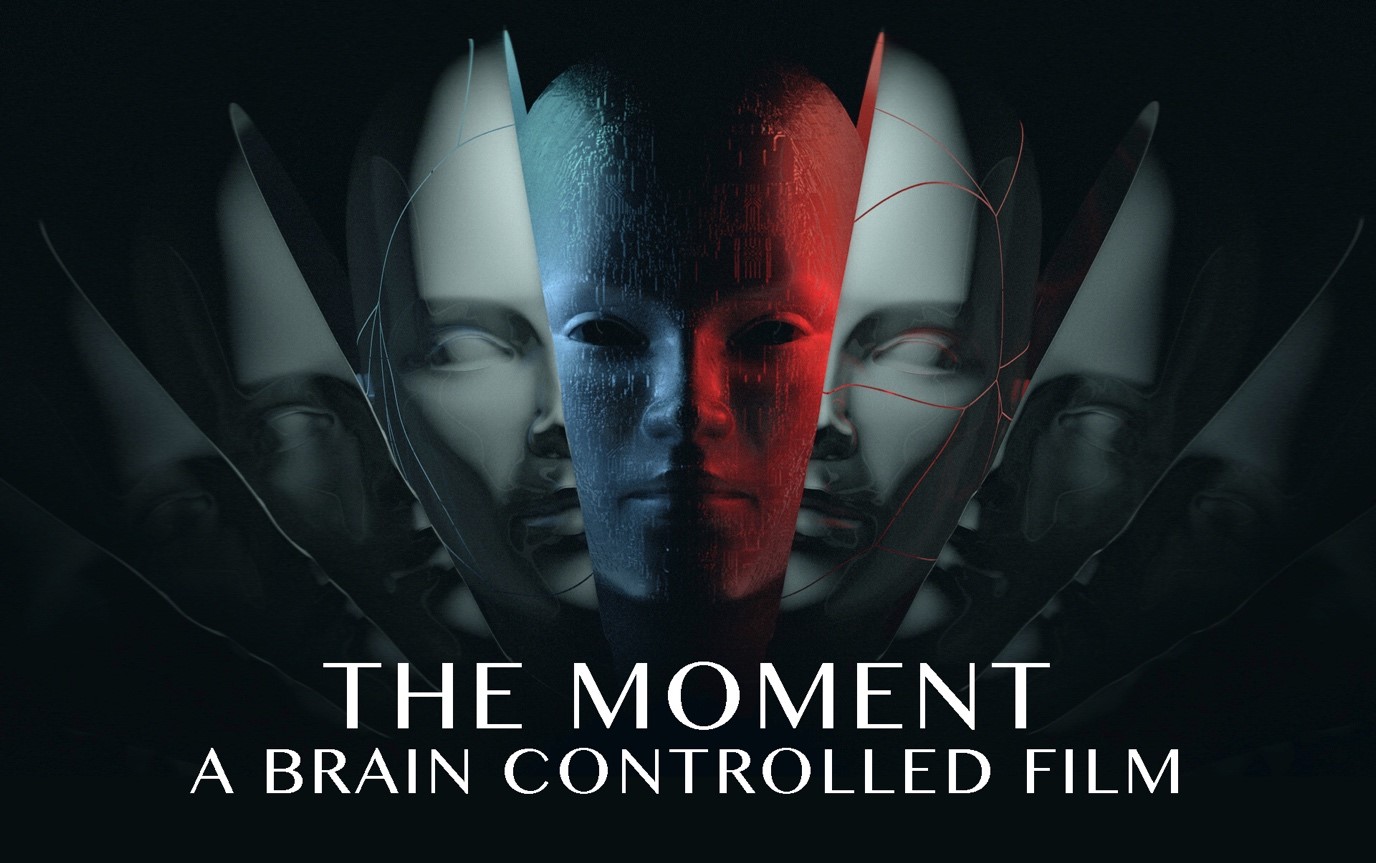 In my first viewing of the piece, my friend Hulda was the controller. Because we had never seen the film before, we had no idea what to expect. Hulda admitted she was nervous to begin, and during the film she would anxiously look over at the rest of us, as if she were trying gauge whether or not we were enjoying it. Possibly because of her nervousness, the film was barely comprehensible. Her version of the film followed the primary plotline, following a man who used to part of the government squad that chased down individuals but had abandoned the force after witnessing their immoral practices. However, her version was frequently intercut by neural animations and cutscenes that would block our view of the action. These interruptions distorted audio, making it impossible to understand what was happening. When the piece ended, we were mostly disappointed that we could not grasp what had happened. Hulda professed that she had tried to change the plot to focus on the characters instead of the neural cutscenes, but the more she focused on changing it, the most distorted the film became.

The viewing in which I was wearing the EEG headset was much more comprehensible, following a similar linear narrative to Hulda’s, but focusing more heavily on the female protagonist. We followed her hiding from the government squad in the forest, drawing the cryptical triangle imagery scene throughout the film in her notebook, and hiking alongside mountains. She reunites with the male protagonist at a caravan and they talk to each other about how the Moment is trying to eliminate individuality and assimilate everyone to become complacent and conform. The government squad arrives at the caravan and murder the man, while the female lead hides from them and converses with a female, holographic brain-interface that bemoans the cruelty of the Moment and her inability to save them. Then, we cut back to the man, lying unmoving on the ground. The girl bursts out of the caravan and fights the squad, taking them down one by one. She walks off into the distance. We see the man on the ground again and he suddenly gasps, coming back alive. The screen then cuts to a monologue about the Moment by the female, holographic brain-interface before everything fades to black.

For my viewing, I deliberately attempted to control the movie in more subtle, nuanced ways. I would tense and untense my eyes, scrunch my forehead, and blink when I wanted to change certain cuts or maintain a scene (avoiding frequent jump cuts to the neural animations). I would use a great deal of concentration, but I was not thinking verbal thoughts like “Focus on the female character!” like Hulda told me she did; instead, I kept my thoughts vague but concentration on the movie with intention. I do not know if my odd methodology for controlling the movie actually worked, but by attempting to actively control the film, I definitely approached the process of viewing extremely differently. I focused very intensely on the screen at all times, but rather than let my mind think about film, I was intensely watching the film moment by moment, not lingering on past scenes or future implications. 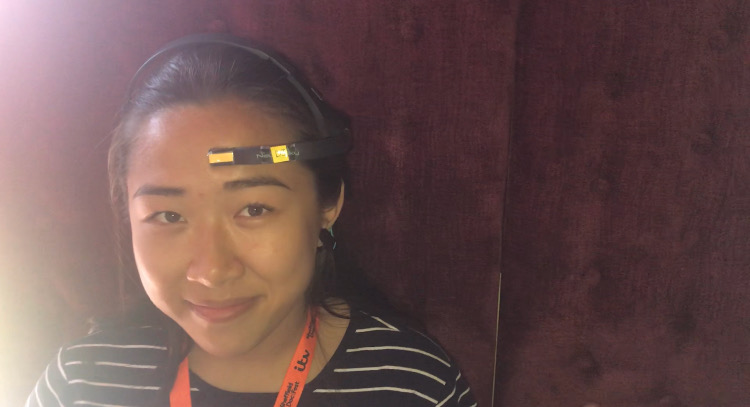 Hulda in the EEG headset. She looks very nervous (and she was)

The film sought to be both an entertaining, highly individualized experience as well as a potential research opportunity to study the interactions and reactions of the viewers, as well as monitor the attention levels and brain rhythms of the controllers during the experience. The brain-controlled aspect of The Moment was not only useful for driving up buzz during the festival, but it was also a new and innovative storytelling mechanism. Because the story reacts to the viewer’s subconscious, it is extremely unpredictable and variable. With every viewer taking away a different experience of the film, the experience opens up the possibility for multiple viewings and social interaction among viewers to discuss their unique experience of the film. The use of the neural animations was an ingenious way to create variety within scenes without having to heavily adapt the storyline. Although it was at times distracting, the animated cutscenes greatly benefited the science fiction storyline and made the viewer feel like they themselves were a part of The Moment.

The Moment was created as an experimental form of media. Rather than conforming to the conventional film structure, it sought to cultivate an atmosphere that responds to the controller in real time as the controller responds to the film. Rather than film, which is a one-way experience—you react to the film, which remains static—The Moment allows the user to play an active role in the film subconsciously. Unlike classic “choose your own adventure” games and films, the user isn’t taken out of the experience by answers questions about the narrative they want to follow. The Moment works much more subtly, by shifting the storyline and visuals according to the user’s brainwaves rather than conscious, arbitrary choices they may make.

I think media works that attempt to utilize shifting narratives or personalized films based on user responses (whether it be conscious or not) like The Moment are still in the very early stages of production. While I enjoyed The Moment and was extremely interested in trying to control the film myself, I am not sure whether it was completely successful in creating a comprehensible narrative or compelling story. The novelty of the piece is that you, the user, has an active role in the story. However, for that to remain true, a story must exist in the first place. If some users’, like my friend Hulda, films lacked an understandable plot, it fails the user. For this medium, I think first the story should be perfected and made compelling to the audience, before it can become a variable, individualized experience. Without the story, the novelty of a brain-controlled film will wear off fast. That said, I am excited to see the future of this technology and how this medium may grow in the future. 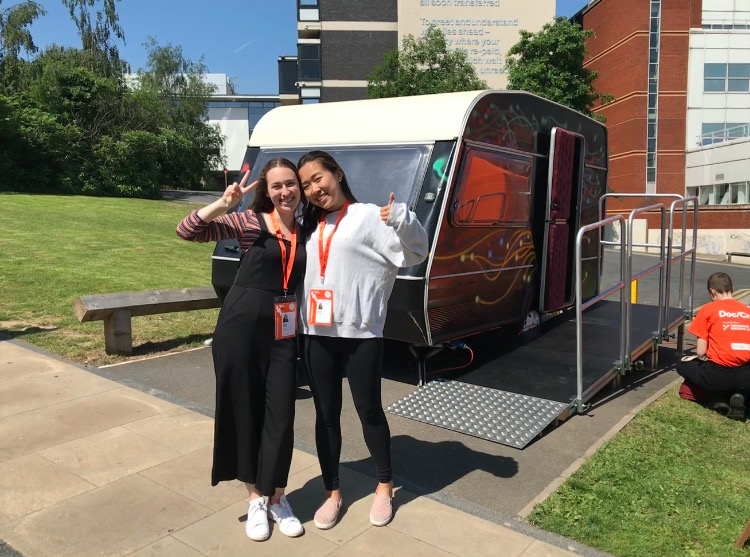 Goodbye, the Moment! It was an overall really cool experience