Review: The Day the World Changed

The Day the World Changed is a large, room-sized VR experience that is done with 4 HTC Vives (at least in Sheffield 2018). There is a large, black, inflatable installation attached to the wall of the set. It looks like black slime mold, enlarged many times to cover half the wall (pictured). What appears to be black-and-white pictures of people are projected onto this same wall. The headset is put on like any other HTC Vive. A volunteer hands me the controllers, making sure that my hands are oriented correctly. Apart from the starting room and ending titles, there are 3 distinct scenes. 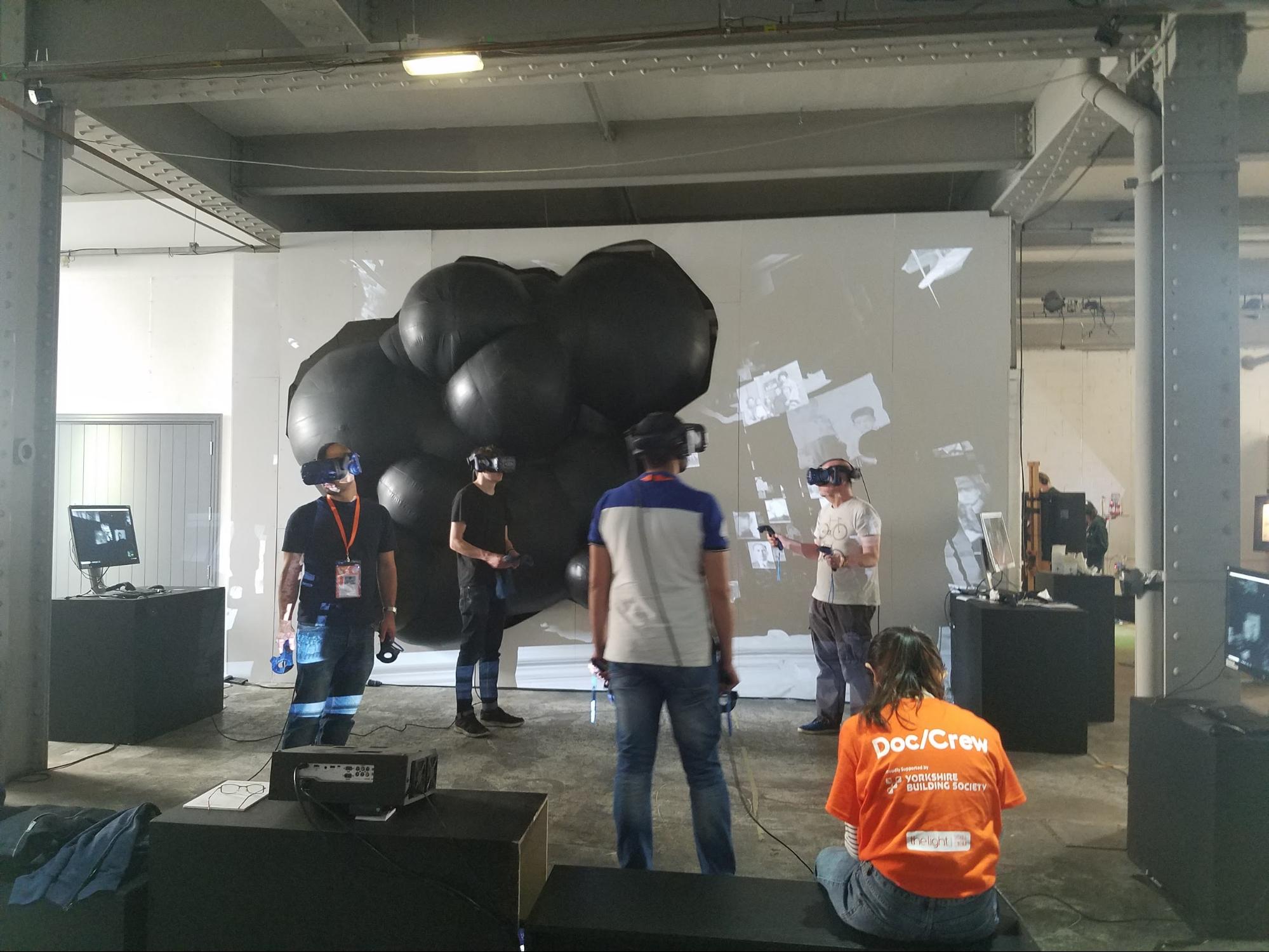 The 3D installation, picture by me

The experience starts off in a “waiting room” in which a cuboid object floats above a flat galaxy. The rest of the room is black. Other people can be seen as “ghosts”

Once the experience is started, a gigantic Earth appears overhead and quickly moves toward me. Narration starts. The floating cuboid hits Germany and a clip of Nazis are shown on a black cloud. The black cloud spreads across the world and another scenes of atomic bomb development are shown on this cloud. We are then “dropped” on Hiroshima by moving them to ground level in a few seconds. The scene blanks.

We them find ourselves in a broken tower of some sort. There is rubble and some artifacts on the ground. Any one of us could touch the artifacts and a story would begin to play. I am not sure if it was a bug, but sound cuts out until a ball with someone who survived the bombing appears in the middle and narrates their story. Images from the destruction rain down around us, projected on the ruins.

The ball in the middle changes to the Earth. A virtual infographic appears above, showing how many nukes and which countries have them. As time advances, mushroom clouds appear over Earth until it is total covered by the black cloud. With the addition of “backlighting”, we find themselves surrounded by large missiles (presumably nukes) all pointing at the clouded Earth. After narration about how easily humanity can destroy the planet, we start becoming particles of light. These particles dissolve the cloud surrounding Earth as well as the nukes. The experience ends stating how a nuclear treaty was accepted by 100+ countries in the UN, but rejected by those with nukes.

Initially (reading title only), I was confused at what this project was actually about. Seeing the physical installation only narrowed it down to something that was “bad”. I was unsure if it was going to describe disease on a global scale or something else. (As stated in the description, I thought the installation showed black slime mold). That was my initial impression when I heard it was about the world changing.

I made some effort not to read into the description of the project and to experience it first hand when others told me this was a great experience. So, I was still under the impression that this project focused on a global disease (in the traditional sense, as one can say “Nukes are a disease that have spread across the world”). The opening waiting room started giving me the impression that this was not about disease. Only when the dark object hit Germany and started the “fear cloud” did I realize this was going to be about nukes (WWII was a major reason nukes were made).

After some time in the experience, I was well aware that this project was on nuclear weapons, the fear they create, and how we might be able to stop them from destroying the future. I was disoriented and felt like falling in a scene that dropped the user to the ground. This time, the disorientation added to the experience rather that detracted from it. There was another scene that really stood out to me: after a cloud of fear surrounded Earth, nukes pointed at Earth were revealed, varying in size, plenty in number. Everywhere my head turned was nukes. I think I gave a gasp here. I think most people know what rockets/nukes look like. To show them larger than Earth and ready to fire allowed visitors to experience the scale the weight of the problem.

Afterwards, I was still shocked at how well designed the project was. This project was an amazing example of something that required VR to achieve this level of effect. It showed many of the concepts and information that I had gathered watching other, traditional (“2D”) videos, but this one impacted me more. I wanted to tell how well done this project was and how it plays with position, movement and scale very well. I wanted to take action on a nuclear treaty.

There is a recurring theme of the “cloud of fear” which is a black cloud that covers and spreads across Earth to represent fear and destruction. This cloud is also a metaphor as humans have a natural reaction of the dark being the unknown and something to be feared. The way the cloud spreads in veins and how it curves and turns matches either blood vessels or unbridled growth (think thick vines curling over each other in a jungle), inducing a sense of unease through something evil, visceral and primal.

The mushroom cloud that society has come to relate to nuclear weapons was also used. These mushroom clouds were directly turned into the cloud of fear in the scene where the world was being covered in fear.

Near the end of the experience, the theme/metaphor of light is also used as the ghosts (including myself) turn into light particles and dispel the nukes and cloud of fear.

I believe this work is one of the best representations of visual effects in VR I have seen so far here at the Doc|Fest. This work plays with scale, position and movement within the space. In addition, the viewers see each other and themselves as “ghosts”. This creates the effect that we are present, but not in a physical way. Other than the starting waiting room and ending titles, each part of the project had something only doable in a 3D space, and potentially only in VR.

In the “first scene” where visitors are introduced to the subject, the Earth appears from the top of the screen and stereoscopic vision allows viewers to see the scale of the planet. Because of this established scale, the object hitting Germany and the cloud that follows have an added impact. Then, as the user is in a position above Earth, in “space”, the scene ends by dropping everyone onto Hiroshima rapidly, like a bomb.

In the “middle scene” with the ruins, some objects can be interacted with to show a story. There is not too much that sets this apart from other VR games where objects are picked up except for the social aspect of it (others can pick up the items and start the stories). Then, when a survivor starts talking on a ball in the middle, the sight of pictures of the devastation raining down on the viewers gave an impression of the sheer amount of people and buildings ruined by this one bomb.

In the “final scene”, scale is used to show how small the Earth is as information about how many nukes countries have is displayed above. All this while mushroom clouds cover the planet with a black cloud. Then, nukes are revealed to the viewers. They are much larger than Earth, and they are all pointing at it. The scale here shows the weight of how easily we could destroy each other with nukes. Then, all the ghosts (other people in the experience) start turning into light that dispels the nukes and the cloud, showing how, as a group, there is a chance to end this without destroying everything we know. 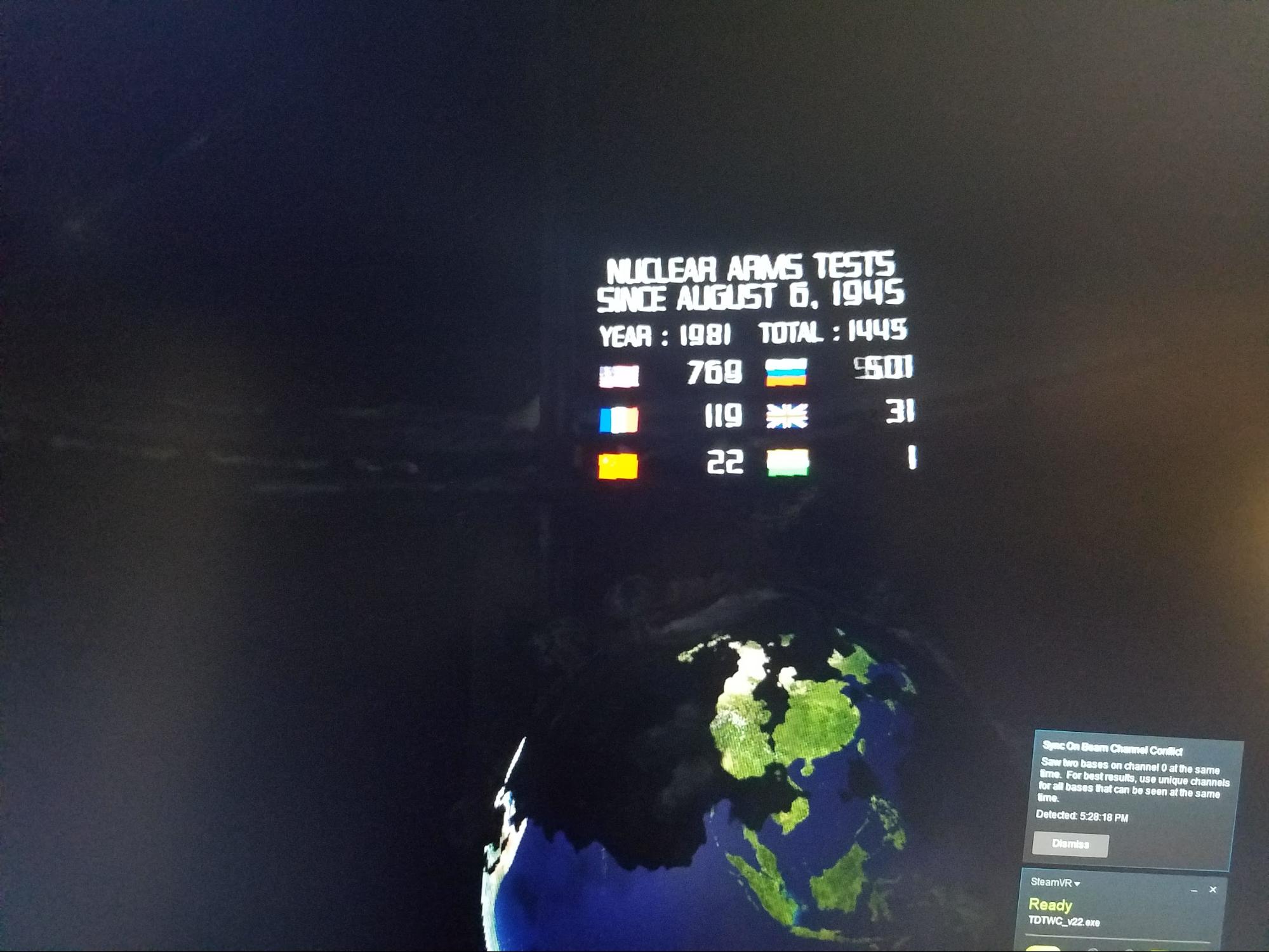 Picture of the infographic on the computer screen.

Based on their association with ICAN (International Campaign to Abolish Nuclear Weapons), I believe the goal of this project was to bring awareness to the level and scale of the Nuclear Weapon problem the world has. In addition, I believe it wants to make people act on banning nuclear weapons.

Instead of making this a solo experience, I believe the 4 connected Vives and the “ghosts” were meant to add a social aspect to it. One example of this was how, in the building, when someone else touched an artifact, the story related to that artifact could also be heard by me, and I could see the same object floating around. I interpreted this as how the path to banning nuclear weapons requires more than just me to act, but it requires everyone. This notion was emphasized further when our hands and bodies became the light that drove away the nukes and the fear shrouding Earth.

This piece plays with scale and movement so well. It’s a definite example of the things VR can accomplish that “flat”, framed movies cannot. For this reason, I believe the piece conveys the message extremely well, even with the possible sound bug that happened in my viewing.

In context, I have already seen some videos on how important it is to never go into nuclear war. This experience was unlike those as it uses “show, not tell” to another level. Instead of just telling the stories of those who survive and how terrible the devastation was, they throw you down as the bomb, giving an uneasy feeling of falling and making the message more memorable. Instead of merely showing the numbers of nukes climb as the years pass, it’s shown above the world as explosions shade the world in a dark cloud (of fear?). Instead of having a pan-around or many cuts of nuclear weapons, nukes pointing at Earth are backlit and surround you. Everywhere you look are nukes, and they’re all pointing at the planet we live on, still obscured in a dark cloud. Then, the “ghosts” that are the people with you turn to light particles, banishing the nukes and the cloud of fear. I thought of this as the group effort we need to end nuclear weapons. Only then does the experience show how a nuclear disarming resolution was widely supported- except from countries with nukes. This shows that the goal was feasible. Taking off the headset, I still had the feeling of those scenes, and the message of how we should no longer have nukes for the greater good. So, yes, if the goal was to get people aware and active in banning nuclear weapons, this experience does it spectacularly.