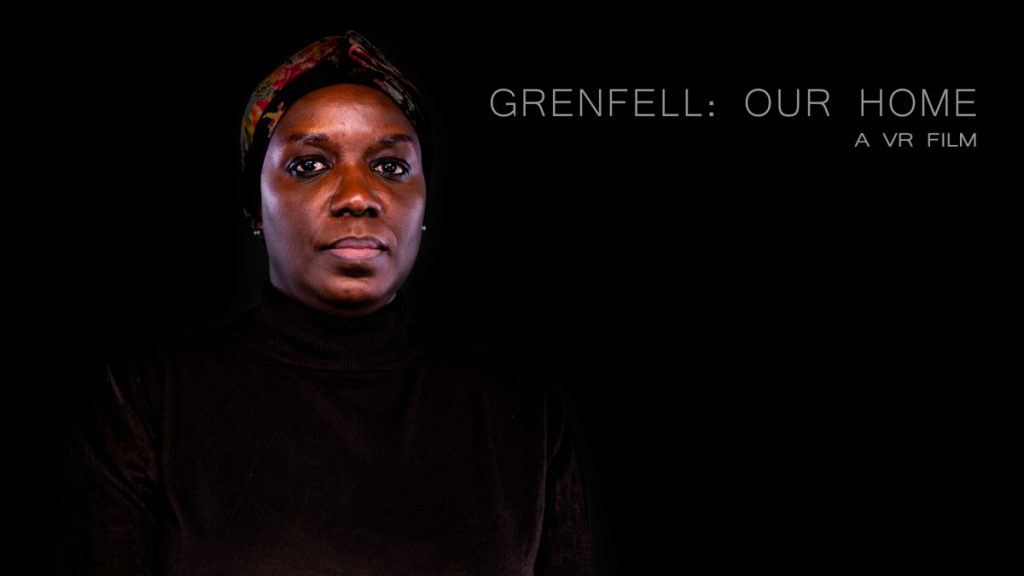 Grenfell: Our Home is a 360° video revealing the stories of those who survived the tragic Grenfell fire. It starts off with homeowners discussing their ideal home, and how they felt when they moved into their home. The video starts with a blank room with simple sketches and  the view outside. After discussing their ideals expectations, the homeowners explain what their homes looked like before the tragedy. Throughout their description, there are 3D models and photos popping in the room. After discussing their good memories, the homeowners talk about the tragedy. They recall the events where everything was all smoke everywhere, their homes and neighbors in the fire, and the sadness and shock. In the end, the survivors discuss their futures and how they plan to recreate their homes again. They end on a hopeful note, believing that their futures will be happy and peaceful like their lives prior to the fire.

I viewed the documentary in two different forms of media: The 360º Igloo Vision dome at Tudor Square and then VR headset in the Trafalgar Warehouse. They both have their pros and cons as to presenting the story. For example, the use of space was significantly different. In the igloo, I was able to see everything because of peripheral vision. In a way this was a good thing because it allowed me to focus on the main story without missing anything in between. However, while the space allowed for a lot of wide views, there were five other people with me. This made the viewing feel more like a film rather than an immersive experience.  On the other hand, for the VR headset, I was limited in terms of sight. I felt restricted, and I couldn’t see things unless I moved purposely to see the action. However, I was more immersed in the VR experience than the Igloo. Since I wasn’t in a room with others, I was able to empathize with the homeowners. In the Igloo, since I could see everything at once, I got “lazy” in terms of exploration. However, with the VR headset, I needed to make a conscious effort to decide what I wanted to see. I could be more attentive on listening to the homeowners when I was on the VR headset since my vision was limited.

Grenfell was a great use of the 360º experience. They were able to simulate the descriptions of the homeowner’s places within the experience. With the visual aid, I could get the atmosphere of their place. It felt like the homeowners invited me to their home. Grenfell is a nice combination of a narrative and a purposeful use for a 360º experience. It gives a focus point that the audience is always able to look back and focus on. At the same time, the audience can explore how the homeowner’s place has developed throughout time. It offers me solid contextual visuals, helping me emphasize how they felt when tragedy struck.

The message of the experience was to communicate the personal stories of how important each home was to the homeowners, along with having the audience empathize with the homeowners. Usually events such as this creates a lot of media on the news, but those mediums never delve closer to realizing all the emotions the victims had experienced. In this piece the audience is listening to living memories of people who’ve experienced this huge tragedy. Grenfell: Our Home isn’t just about the fire, but a way to give a respectful representation of people’s stories in a very sensitive topic.

The VR experience was more successful than the Igloo experience. When I first viewed the piece in the Igloo, I would often ask myself why it was necessary to show this video in 360º. It honestly felt like a movie with a long screen. It felt like the production could’ve achieved the same amount of success, if not more, through a traditional movie. The reason why I felt that way was because of how much I was able to see. I didn’t need to try to focus on any one thing, all I had to do was watch as an overlooker, not as an actual person with the homeowners.  This happened because of the overall atmosphere of the Igloo. With chairs in the middle and people surrounding you, the layout felt more like a movie theater. On the other hand, when I used VR, I felt like I was in the room with the homeowners. When they were talking, it felt like they were talking directly at me, and not just to a screen. This was probably because I couldn’t see anything else other than their rooms. There wasn’t any visual distractions, such as the furniture or the people around me. I I felt significantly more immersed in the environment in VR rather than the igloo, which is why I believe that overall, the VR experience was successful.