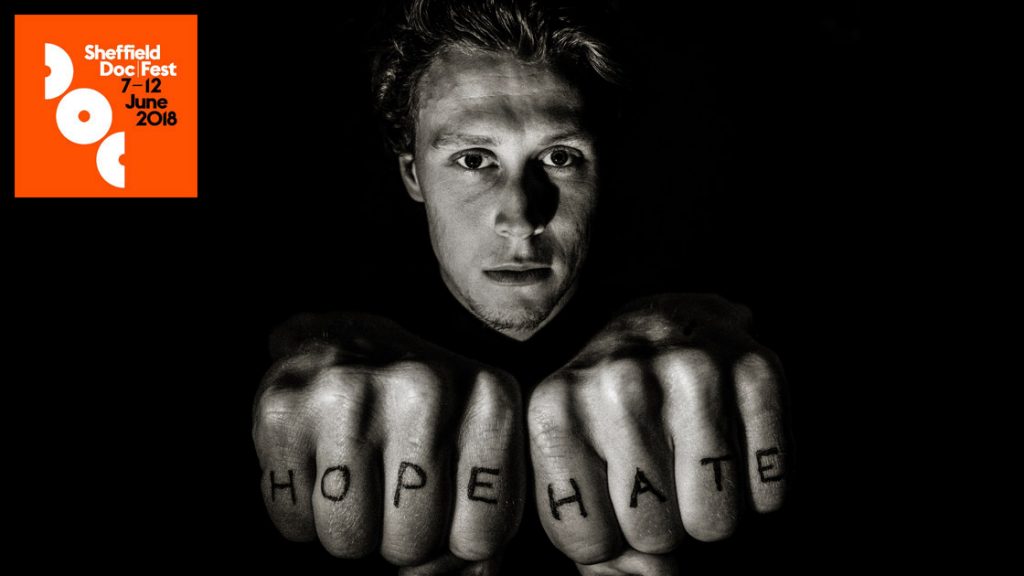 Upon entering Tudor square, a main hub doc-fest, you are greeted with the sight of two shipping containers in the middle of the space: one labeled “HOPE”, one labeled “HATE”. The volunteers running the exhibit inform you that you are only allowed to choose one experience . Then, they proceed to stamp your arm such that your choice is now visible to the world around you. Luckily for you, I somehow missed the stamp upon my first viewing, and was able to experience both “HOPE” and “HATE”, allowing me to better inform this review. Upon entering your chosen experience, you discover the interior is outfitted with a screen which initially shows only a blank slate of neon green and a few benches. As soon as everyone has entered, the volunteers close you into the space, with the loud scraping sound of metal on metal as the door locks behind you.

The screen then begins playing a 15 minute film sequence, following a classic 3 act structure with a few similarities in both sequences. There is an intro which flashes various instructions, including: “Focus.”, “Pay careful attention. You will be asked questions about this afterwards.”, “Concentrate.” The audio and visual cues throughout this intro are nothing short of uncomfortable to sit through. After this, the second and third acts differ a bit, however, both pieces feature a monologue by the same actor, George MacKay, and utilize a phone call interruption as a way to move from the second to the third act. In order to submit to the spirit of the piece, I’d appreciate it if the reader chooses to only read one of the following descriptions:

You view what appears to be a construction worker’s locker room, the only visible entrance coming from the back of the set with a small window that lets in a ray of light. In enters MacKay, who begins changing out of his construction uniform into a suit, while simultaneously speaking directly to the audience. He begins by telling the audience that he’s “probably not what we were expecting” and a “disappointment”, but that we shouldn’t be worried because “disappointment is the oil to the hope engine, otherwise it’s just expectation.” He also tells a story about his sister, Fran, who seems to be either dead or sick, given MacKay’s his initial wistfulness when mentioning her. We learn of how Fran went to university in America, met a man there and brought him home to meet the family, and of how later MacKay and his parents traveled to America to return the favor and meet him in his own space. Here MacKay goes particularly in depth, giving a heavily detailed description of his time at a show with his family meeting “Tambourine Mary”, who came down from the stage and extended her hand to MacKay for a dance. Here MacKay enters a near frenzy of passion, urging us, the audience, to “always take the hand”, and to “offer the hand when you can.” At the end of his passionate speech, hopeful music begins to enter the background until we cut away from the previous scene and enjoy a 2 minute sequence of various ‘hopeful’, visually stunning cuts.

In enters MacKay wearing a full suit, approaching a desk set up in the foreground. He begins by taking off his jacket, then setting up a camera and light pointing at the audience. He gives a small speech on camera about how something referred to as “the report” separates us from them, and how we must maintain “security and prosperity”. This quick piece focuses strongly on heredity, but as soon as he turns the camera off he comes back to us to vent about his father and his unattainable standards. MacKay seems very set in his views and in his purpose, telling us that “we protect our children so they can enact our revenge”, that “hope is the first thing to die, we pass on our hate”. He sees his own hateful view as harsh, but true, and says that anyone hopeful is weak for not accepting the truth. Throughout this speech, MacKay looks more and more hallowed, with deep bags under his eyes, meeting the camera with an unrivaled intensity. At the end of his speech, it cuts away from the previous scene to a 2 minute sequence of various gorey, violent, “hateful” cuts.

This piece features very little interactivity, with the only instance of such being the user’s decision to pick either hope or hate. Beyond the initial entry into one of the pieces, you are simply a viewer in a video installation on which you have no agency to affect. While this does simplify the interactions to a degree, it also gives the user a stake in the piece; they feel as if they have aligned themself in a binary system, and that alignment is now visibly displayed on their arm for the days following.

The intro sequence, though seeming to have little emotional relationship to the video, cleverly serves to prime the viewer for the experience. This is incredibly important in a situation where the target audience is a bunch of film critics. If not for this introduction, it would be near impossible to elicit any emotional response from the majority of its viewers.

The main body of the video is fairly straightforward. The makers collaborated with a team of neurologists and claim that their biggest takeaway from this was that “happiness is more rewarding when it’s had to come through some obstacle.” With this in mind, both sequences take the audience on a journey from a near neutral state to whichever emotional state you chose. The creators found, through iteration, that they were able to create the strongest emotional response by progressing in incremental steps with withdraws in between. Their final edition functions by inching a little bit closer to hopefulness/hatefulness, inserting a smidge of doubt, then heightening the emotion, and repeating this process again and again.

The overall message of the piece relates to the highly polarized political environment that both the UK and America find themselves in today, especially in regards to Brexit and Trump. It suggests that the world seems purely black and white, without at all acknowledging the grey in between. Once you choose to enter the environment, you are locked in, with nothing to focus on except the video sequence in front of you. It is very easily to get swept away by whatever sequence you choose, just as in humanity it’s very easy to get swept away in groupthink and fall in with the opinion of the people you choose to surround yourself with. We are pressured by our societies to be very strongly ‘pro’ or ‘anti’ any controversy, as we are in this decision of which side of this installation to view.

The work is fairly successful in provoking a specific emotional response out of the viewer, though I think its deeper meaning is lost by many. It almost serves as more of an example of the polarizing problem we face, rather than actually pointing out its flaws to the public. This is especially true since the exhibit is open to the public and does not require a festival pass or a booked ticket. It reaches a larger audience who are able to view it in a noncritical way, as well as utilizing its introduction to prime audience members who would typically be more critical. This method contributes to the message of the piece in only when you take part in the experience, enjoy the emotional effects of it, and then also speak to the creators about their purpose, then realize that you fell victim to the same tactics that affect everybody. Unfortunately, it’s very easy for the majority of viewers to miss this message and not get the full purpose of the installment.