Telling a story like that of Newcomer Kitchen is far from an easy task. However, with emerging technologies like augmented reality (AR) and virtual reality (VR), we had a unique opportunity to enhance the story. These two mediums in particular have more recently drawn attention to the manner in which they can put users into new, foreign environments, as well as tell stories in a more empathetic way. Whether it be a completely virtual setting with interactive items, or more simply, a user interface with virtual signage, both AR and VR provide new avenues for sharing stories.

We collaborated with Cara and the women of Newcomer Kitchen during Week 2’s AR workshop. We wanted to tell the stories of the refugee women who cooked at Newcomer Kitchen in a respectful way. Because we only had one day with the women, we felt it was crucial to keep things light-hearted and let them steer the conversations, rather than impose a given narrative onto them. We focused on the meals being served in the kitchen as a metaphor for their stories. We wanted to emphasize the positive aspects of their lives and their experiences integrating into Toronto culture, rather than exploiting their past trauma. While their past experiences shaped their lives, we felt it was more compelling to focus on the future and their lives now, rather than force them to relive their past. As Zahra Rasool (Contrast VR) emphasized at the Alternative Realities Summit, it’s essential to create with the community, not just for the community. 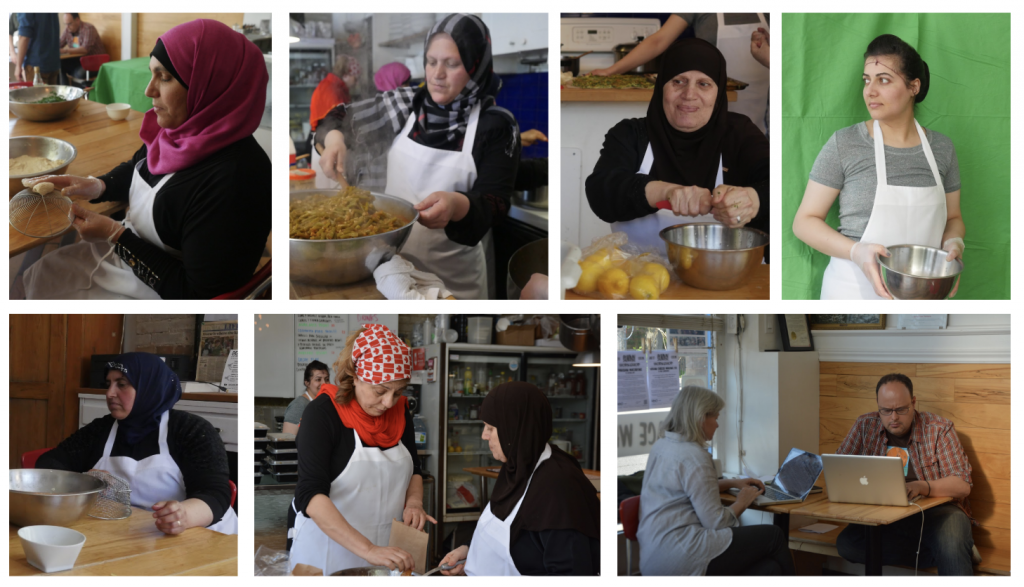 In our first meeting with Cara, she told us that her goals for this project were for us to find a way to bridge the gap between the food consumers (Torontonians) and the food creators (the refugee women at Newcomer Kitchen). We wanted to tell the stories of the women in order to create a better sense of community between the women and those purchasing the meal. At the Doc/Fest, we learned that collaborating with the community is completely necessary; it is impossible to create an authentic, accurate story without including the voices of those involved.

Kalina Bertin, creator of Manic VR said, “I wanted to do something creative and different…something in which my siblings would feel that they were in power and for them to be able to tell their story. You feel so much like a victim when you are going through those moments, but to give [my siblings] that creative power was really beautiful for them.” Manic VR focuses on Felicia and François as they undergo cycling states of mania, psychosis, and depression. Bertin makes sure their voices are literally heard by featuring the voicemails they left her detailing their feelings, emotional states, and experiences. She made sure they had an active role in the creation of the story. She showed them various iterations of the piece to make sure it felt truthful. In this way, we want to give the refugees at Newcomer Kitchen an active role in the telling of their own stories. Our initial plan was to have individual profiles of each of the women that would include a video of them, short audio stories, and photo galleries curated by the women themselves. In addition, it would be great to teach them how to use Hoverlay, so they can update their profiles at their own convenience. 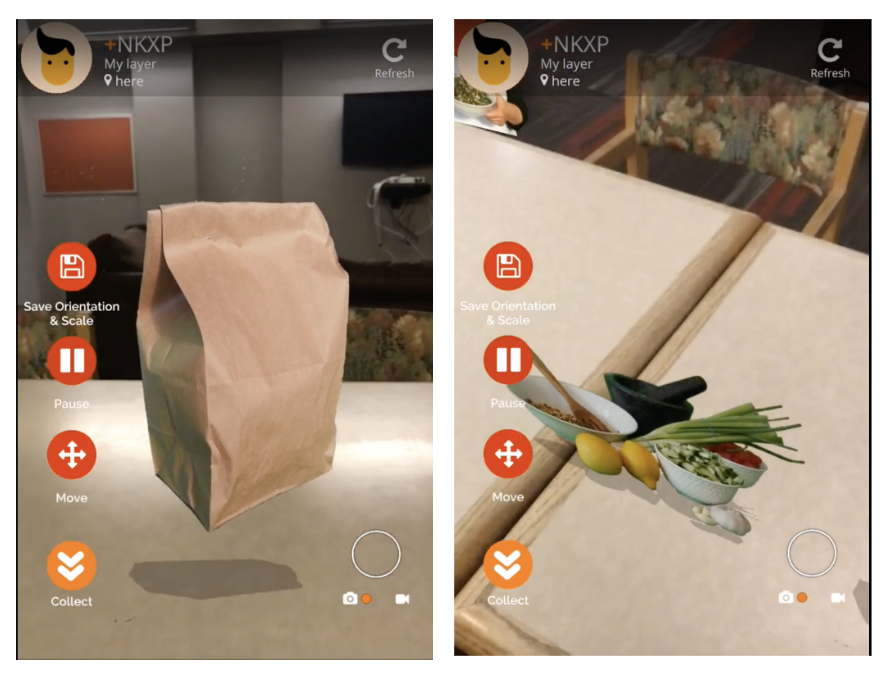 Before attending the Doc/Fest, we had the opportunity to create our own augmented reality and virtual reality projects. This introduction to crafting stories within immersive mediums like AR and VR allowed us to gain a deeper understanding of a creator’s design process. First and foremost, the story should come first. We learned that AR and VR are used as tools to augment the story, furthering the narrative through interaction in immersive environments. A crucial difference between telling a story using the traditional film medium and using AR/VR is that AR/VR cultivates an experience; it’s not just a passive viewing. The viewer becomes a part of the story. Because of the affordances of AR, we thought it would be best to use augmented reality as opposed to virtual reality. VR typically places users in a fictional environment, but AR introduces digital elements to the user’s real environment.

At the Alternative Realities Summit, Charlotte Mikkleborg said, “See the potential of the new technology and what you can do in that space. [Find] the stories from a community [and find the] elements make your experience special.” By spending time with our community partner and learning about their lives, we were able to abstract ideas to represent their stories in innovative ways. We utilized the brown paper bag that the food comes in as a symbolic element that holds both their meal and the stories behind it. Due to the unique capabilities of AR, the user can interpret the stories of the women in their own environment. In this interactive medium, the new technology can bridge the gap between storytellers and the audience. The viewers are closer to the stories than they would be by experiencing any other medium.

As an AR/VR creator, it becomes more difficult to direct your viewer’s attention to exactly what you want them to see, but at the same time, that opens doors for interactivity and add layers and nuance to the story. Kalina Bertin (Manic VR) says, “What I love about VR is that storytelling is very much layered. You have the first line that hopefully 90% of the people will get, then the second, which maybe 80% will get, and [so on]… You have all the layers, and the core of your message must be the obvious one, but you can still use different tools to direct the view of the user.” By including interaction and additional storytelling elements, the creator can craft a story that will leave a highly individualized impression on each user. These mediums offer unique affordances to the user in terms of agency and exploration. The user can play an active role in the story, whether it be through decision making, picking up objects, or directing their focus in the virtual environment. In our Newcomer Kitchen project, participants can see the story unfold at their very own table. By connecting the virtual environment of Newcomer Kitchen to the consumer’s physical space, we are bridging the gap between the two worlds. It’s not possible for consumers to actually meet the women at the Depanneur because it’s a kitchen, not a restaurant. The desire for the consumers to interact with the women of Newcomer Kitchen exists; it is just a matter of creating the virtual experience to make it possible. 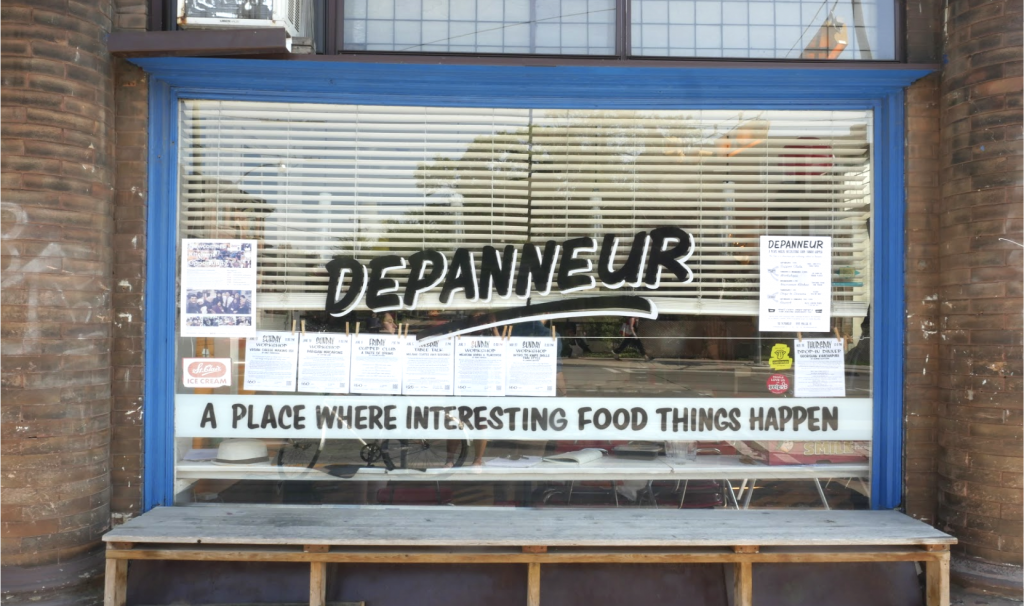 Immersive mediums offer the user the agency to explore a space that they would never have access to normally, like warzones or mania-induced daydreams. In the Alternative Realities Exhibition at Trafalgar Warehouse, the vast majority of the works were comprised of personal experiences or serious journalistic stories.  Despite the subject matter at hand, we found the VR pieces to be engaging and enjoyable. Even with serious stories, we learned that “you can do really hard hitting subjects in a way that is comfortable and enjoyable,” as Camila Ruz Renjifo, creator of Is Anna Ok?, told us. With Newcomer Kitchen, we wanted to share the message of the Syrian refugees through the meals they make, embedding their story into the ingredients. By opening the brown paper bag, the consumers are embracing the intricate stories of the women behind their meal.