Frederik Sølberg is the director behind Doel, a film about the Belgian “ghost town” of the same name. Doel follows the story of a very small town in danger of being overrun by corporate interests, and how the people react. Sølberg describes it as “A bittersweet portrait of a ghost town and a film about why it is so important to have a place to call home”.

What got you into film and telling stories this way?

I think I’ve wanted to become a film maker since I was 12 years old. I can’t pinpoint exactly why … but I do think I’ve always been very fond of telling stories, I’m a very communicative person. My father also likes to tell stories, and I think I got some inspiration from him, but how it became film, I’m not sure. I do remember watching Wild at Heart by David Lynch at a quite young age … but I would say that I always knew that I wanted to be some kind of story teller.

What inspired you to take on this project and tell the story of these people?

My ex-girlfriend spent half a year in Antwerp, and I have a Belgian friend. My friend asked me if I wanted to go for a car ride in the area, and he asked me if I knew this ghost town and I said, “No I don’t”. So, he came and picked me up in his mother’s car and we drove out in this, as I said [during the Q&A session], really sci-fi Blade Runner kind of area, [full of] petrol-chemical factories and refineries and containers and silos. Just before you get to the border of the Netherlands, there’s a nuclear power plant, and just before that is where Doel is. It’s a complete, sort of worn-down, dilapidated ghost town and I just got instantly fascinated by it. So, what I did is that I [said], “There’s a story in this and I want to tell it”. And then I got in touch with the local activity group, and through that … I went back and I met them and I talked to them, and sort of slowly built up a relationship. While I was figuring out what kind of film I wanted to do, my first intention was to do a more “David and Goliath” type of story, a more political story. But since I’m not a journalist, and since I’m not from Belgium, I sort of realized at one point it made more sense … to do a more artistic, not so political portrait of what it means to have a home. 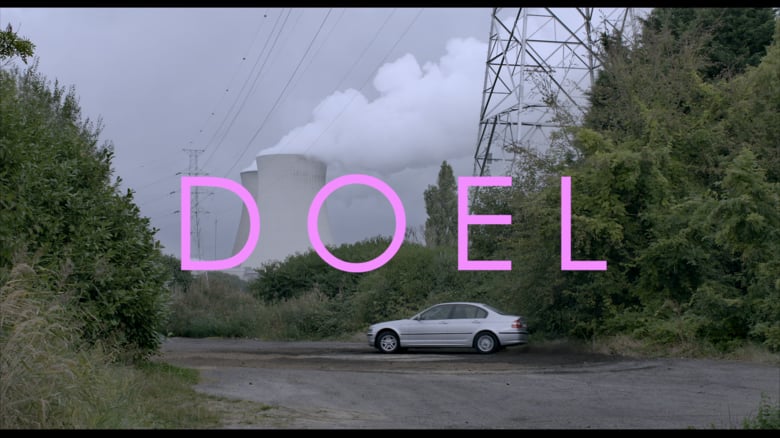 Shot of Doel from film, with “sci-fi nuclear power plant” in background.

What was your process like of getting to work with these people and building a relationship with them as you pulled back the curtain on this small ghost town?

Well, that took some years. At first, we didn’t have any funding so … I would go to Doel say, once or twice a year … I would hang out with these people, get to know them, and through that build up a relationship so that they would trust me. A lot of journalists and curious people visit the world all the time … but lots of time it’s very superficial: they come, they get their story, and they leave. The inhabitants of Doel are quite tired of that. The fact that I kept coming back convinced them, I think. I mean they got to know me and they like me, but they could also tell that even [after a year and a half passed] without any funding I’d still come back and still be interested in them, I think that helped too. … I was spending a lot of time where I wouldn’t ask questions or anything … I’d just be hanging out. I’m not sure, but I feel I didn’t take up too much space, just a nice guy coming from Denmark again and again.

I think it also comes from … [the fact that] I’m a pretty down to earth kind of guy, I’m not snobbish or arrogant, so I think I met them at their level. I’m not some sort of fancy filmmaker coming from Scandinavia … I didn’t arrive with five assistants and a fancy car living in a hotel. I basically just came in a cheap rental car, spent time sleeping in their houses and so on. And I think that helps if you want to get close to people: if you have an open and unarrogant approach. 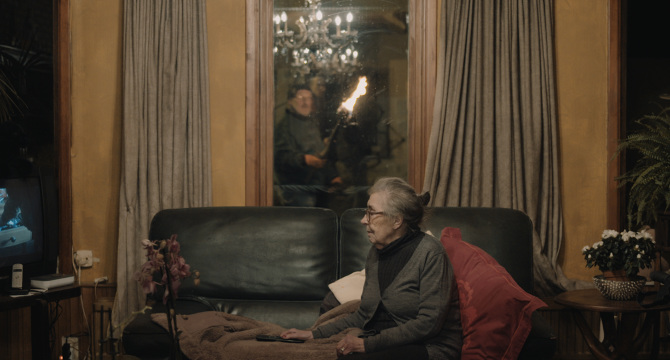 Shot from film, with a prominently featured older woman, referred to as “chain-smoking grandma” by fan during a Q&A session after the screening due to her excessive smoking in most shots she appeared in.

Do you think a project like this could make a difference in the ultimate fate of a place like Doel?

I think the decision makers and the money that is involved, the expansion of the port of Antwerp, is on such a level … it would really surprise me if they take something like this [seriously]. They might recognize that there’s a film [about the situation], but I don’t expect they’ll take this film into that [level of] consideration. But, what I do think … is that the inhabitants of Doel feel recognized with this film. They feel that someone is telling their story … in a respectful manner, and I think that can sort of add internally in Doel a feeling of, “Yeah, we actually have something special here … What we’re struggling for and fighting for is actually worth something”. … In that sense, I think it gives a warm and recognizing portrait of their town and it can help with self-respect in that sense. But, politically, I don’t expect my film will change anything.

Do you have any plans for future projects like this, going to small communities and seeing what their stories are? Or do you have any idea what the future holds?

No, my next film is about a North Korean woman in South Korea. It’s something completely different, and it’s going to be shot handheld and very close up. So, it’s very different from this. But, we’d like to have Doel screened at festivals or communities or towns where they can relate to the problems of Doel, that would of course be nice. But, I don’t have a particular interest in ghost towns or urban exploring. If, in any way our film can … add something for people who are interested or are in a similar situation, of course we’d love to contribute with a screening.