It was the final day of DocFest, so there was no chance I was letting the warmth of my bed trap me into wasting the morning away. I had to get a good spot in line at the Trafalgar Warehouse to finally do the last of the virtual reality I hadn’t been able to get to. The experiences of choice were Face to Face, Vestige, and Manic VR.

The first VR experience was scheduled for 1:30 PM, which meant I had to get breakfast. We went to the Cabin for breakfast and that is where I encountered the waffle challenge of the century. If you ate 6 waffles with 3 giant toppings, they would pay for your meal and you would get your photo on the wall of fame. I had to attempt the challenge, but much to my dismay it was too difficult of a challenge to overcome. I finished one of the toppings and 2 and a half waffles before I tapped out. It was 18 pounds to participate in the challenge, but that’s a small price to pay to live a life with no regrets. I was happy to have tried. I returned the leftovers to my room and then it was time to go to Face to Face. 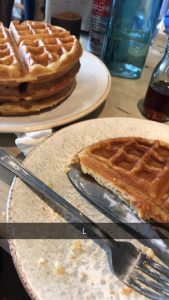 These were the waffles that remained after I had given up on the challenge. The photo is captions with an L to emphasize the loss that I received.

When I entered Face to Face, the wifi had crashed and I was stuck in the initial room for a solid 30 minutes. At first, I was thankful because it meant that I could unwind for a bit and absorb the exhibition and its interactive components. However, I quickly got over it once it started putting my other time slots at risk. I was frustrated that I had to rush through the rest of Face to Face because the story was incredibly sad and unlike anything I had ever heard of before. My time slot for Vestige was approaching, so I had to skip the third installment of Face to Face. At the end of the day, I was fine with that because the story started to make my chest hurt with sorrow.

Vestige and Manic VR were the next two VR experiences I signed up for and they affected me in similar ways. The visuals were stunning and the narratives were sad in their own unique manner. I didn’t resonate with the story in Vestige as much because I found the narrator to be annoying. The story was sad, but I had a preconceived notion about the type of person that the narrator was on a daily basis and that distracted me from getting fully invested. Manic VR was a great story, but the controllers weren’t calibrated properly. As a result, my right hand appeared to be 20 feet below me and that completely distracted me from the entire story. Luckily, Manic VR did not require a lot of hand motions and I soon immersed in the story after the glitch had passed. 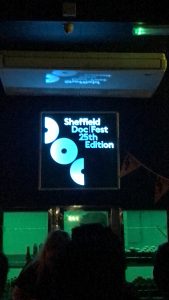 This was a sign right by the bar at the final send off at the DocFest. The party was a lot of fun.

After experiencing these three intense and mildly depressing virtual reality experiences, it was time to party at Code. When we got into the club, there were free vodka shots at the door and one free drink at the bar. I had eaten a huge dinner at Nando’s prior to going out, so the drinks didn’t hit me too hard. I had a great time tearing up the dance floor and it was an excellent celebration to end the festival. We partied hard for a good amount of time and then at around 11 PM we made a journey to McDonald’s. I wasn’t hungry, so I focused on setting some high scores on the Angry Birds app they had available on the iPads in the restaurant. I set two new high scores and left the restaurant in high spirits. Overall, it was a successful final day at the Sheffield DocFest and I am incredibly grateful to have had such a rewarding experience.