The premise of Doublethink (Iain Forsyth and Jane Pollard) is that you must choose one, hope or hate. I first choose the trailer labeled hate. The video starts, and a man in a suit walks into a brown room with about the width of the room we sat in and set up a video camera, pointed at us. He begins with the words “Security and posterity”, and begins to explain how he must live a dark life in the margins, which was a life in the truth because authority is scared of the real truth and tell us all that the real truth is a lie. He addresses hope by saying “hope is the first thing to die, hate can be handed down, stored in the genes and passed on,” and explains how he got it from his father and passed it to his son so he could protect his children and they can live his revenge. He gets a phone call, where all he says is “understood”. 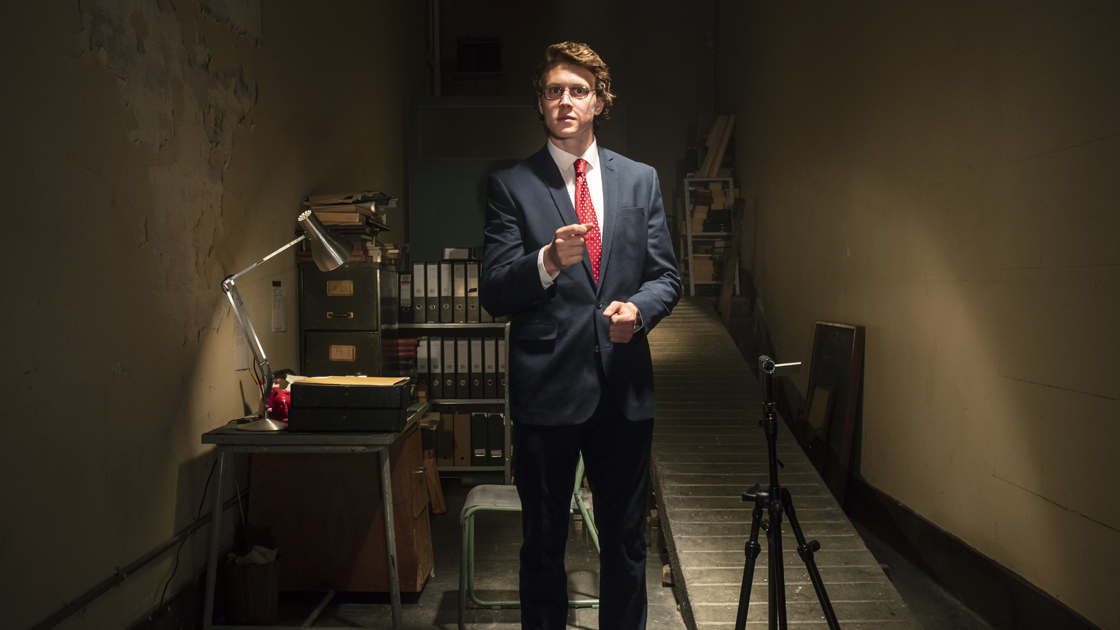 Then he starts itching and scratching and even gets a bloody nose, acting a bit more insane. After more talking, he tells us “you are as disgusting as them and need to pay,” for the first time flipping it on us. He continues with the ramped up views, saying “equality is a myth” and “They forced it and soon they will be gone. They will pay an eye for an eye, a tooth of a tooth, and a punch for every fucker who refuses to listen.” Suddenly a film starts, all in bright red white and blue colors. We see blood transfusions, explosions, breath, people plenty more medical scenes, gas, and crashes. There is a loud quaking ambient sound in the background. People are suffering, nazi’s are shown, an eyeball and things falling show on the screen. Suddenly the screen goes black and the sound cuts out, and I could just barely make out the darkened room we started in on the blackened screen. 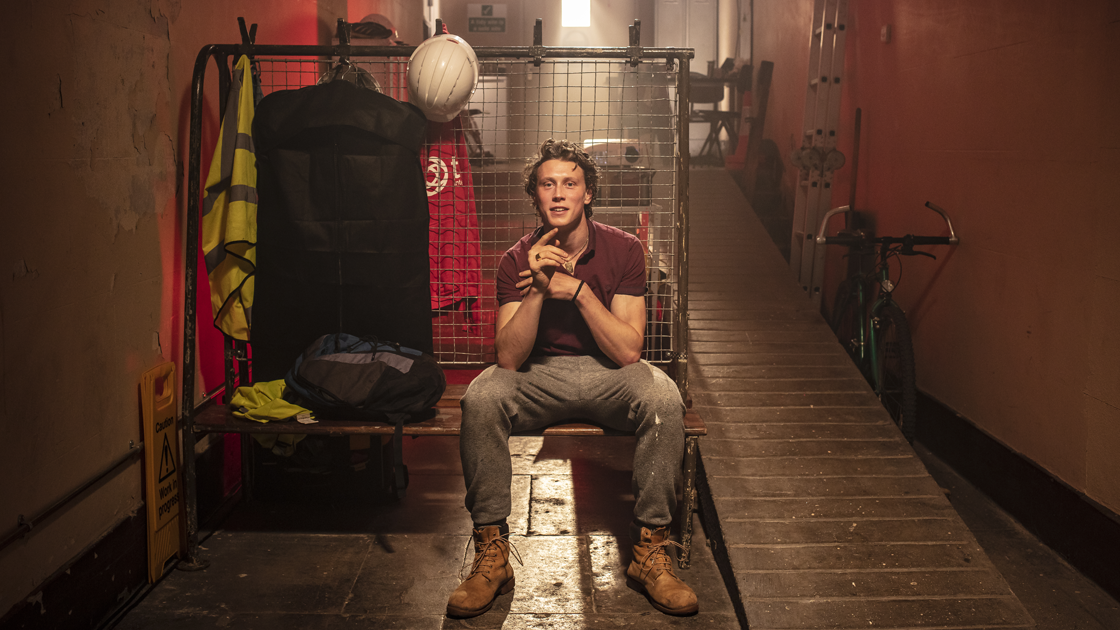 I later attended hope, and it took place in the same room, but with a few other props around.  The man walks in as a completely different person this time, wearing a helmet, sweater and sweats, clearly a construction worker. He looks over a few note cards, and  talks about how anger was easy to deal with, but you are really in trouble when someone said “I’m not angry just disappointed” because anger burns out, but disappointment can last a lifetime. But he explains that this is okay because “disappointment is the oil in hope’s engine”. He talks about Fran, his sister, and her American boyfriend. He talked about how much Fran and her boyfriend liked each other, how he flew to their wedding, and how bars are completely different in America. He said people sit down and don’t say anything, but then “Tambourine Mary” came out and she was dancing wildly. He imitated her and explained how the lady  brought him up to dance, and how Fran pushed him to go, so he brought her up with him. He explains how wildly they danced, and then she was gone. He got up to answer the phone, greeting it nicely, and when he hangs up he dresses faster for his next thing. He practices his speech, saying “We’re here to give an award”, and then skips ahead in the story. He explains how he felt like that he was a part of it. He says there’s a connective thrum when we come together, and how we should all offer a hand like his sister fran did, and hopes we are the ones that the tambourines never stop shaking for. He said “shake every day, shake yourself proud”, and begins the projector. It shows a moon, jellyfish, candles, and allows slower shots and calmer sounds. It shows people protesting peacefully,  waterslide, a peacock, and much of nature. A rocket takes off, tambourines shake, and I see a baby in an ultrasound. It shifts to a black screen with the darkened room in it, ending the exact same way.

I noticed that this piece seemed to directly address me and the rest of the audience, appeal through showing emotions, and then wrap up with a montage. At the beginning of the piece the participant is told exactly how to engage maximally, and engaging is very important to this piece. Visually, both scenes started in a color muted scene, the hate side more muted than hope, and Hate talked about them versus us, connecting to the audience and trying to remind them of times they’ve heard that. Hope talked about his family and told stories about life, reminding us of that time we got dragged up to do something surprising. Both of these experiences made it feel interactive even though all I did was pick which room I went into. The visuals shown after the man talked to us was all color graded red white and blue, making it strong and vivid. The background noise and time on frame shaped my emotions toward either thinking humanity was bad (hate) or was successful (hope).

The space of the room the man was talking to us in lined up size wise with the theatre we were watching it in, putting us even more in the space. Both pieces had slogan phrases, for Hate it was “security and posterity” and stuff about them versus us. For hope, he told us “disappointment is the oil in hope’s engine” and “never stop shaking” It definitely employs metaphors in the speech, for things such as “never stop shaking” were not to be taking literally, but more as a way to remind you to go out and experience life. The creator’s goal appeared to be to show us how the same format could make us feel such an intense emotion, and let us choose if we wanted to feel hope or hate. It definitely got to me on a gut level, the visuals shaking me in hate, and making me feel uncomfortable but also understand some of the ways the world may not be so great and how we are suppressed. Hope, however, inspired me, and reminded me I could make a difference, even to just a few people. Both hate and hope were effective experiences because they reached me more and more throughout the experience, and made me feel the emotions they wanted and understand where they were coming from.

I felt this piece reached me as the viewer and made them feel like I was part of it. By titling the pieces hope and hate, it made it quite clear which emotion I should experience, and I certainly felt those emotions in the respective videos. I think this means that media truly is manipulative of someone’s emotions, and even can be used to change one’s emotions in the exact way wanted. This says quite a bit about propaganda, which these videos did come across as, given the intros. While the videos were more a proof of concept of showing how well immersive media could control emotions, the meaning seems to be more about the ability of this method of communicating, for better or for worse.

This work seemed highly successful. It seemed designed to make you experience hope and hate, and it certainly made me experience both.Through tactics of making me relate to the man on screen and feel like I was in the same room as him, the pieces were really allowed to reach me. And then the way he spoke the words seemed personable and sincere which caught my attention and made it easier to believe him. There wasn’t a single cut in this portion of the video, making it really feel like real life, making it even more believable. To top off the speech, a montage was shown at the end of each film to prove their points, and without even using words, the montages clearly seemed to show what the person was talking about. I certainly think Doublethink had a successful hate and hope peace, making it a successful media experience.

Screened in the Alternative Realities Exhibition at the Sheffield Documentary Festival.