Day 25: VR/AR Opens at the Festival

Unfortunately for me, Day 25 was also my birthday, so possibly the busiest day ever was started at midnight with birthday texts and Facetimes (which was fortunate) which causes practically no sleep. So I promptly went to sleep at 3:00 AM.

At 7:30, I woke up to my alarm with a distinct urge to roll over and go back to sleep. Luckily, my enthusiasm to get a good intro to the VR/AR building was slightly larger, so I hopped out of bed and got ready.

Before 9:00, we were waiting outside the Trifalgar Warehouse waiting for the building to open so we could rush to yet another line and sign up for our favorite VR/AR experiences. Of course, everything must run at least a bit late, so forty minutes later we got inside and I signed up for plenty of events later that day. 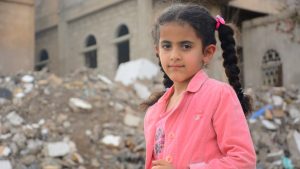 At 10:15, I ran into the door for the first thing I signed up for (I had just finished signing up for things), and watched two VR 360 experiences under the title “Childhood”. The first was titled Journey, which followed a few people through their journeys, showing stories like a woman who used healthcare to take of her sick children (until recently they had to walk over 100 kilometers for healthcare, and a girl born with HIV trying to accepted in life and help others with HIV fit in as well. This story was sponsored by UNICEF and showed how UNICEF helped these people. The second story was Yemen’s Skies of Terror, which followed three children around Yemen, showing the first deal with losing a friend from a missile, the second losing his entire family and having to live alone, and the third finding her friend after searching the rubble after her friends house was hit. These stories all opened my eyes to what it was like to be a child caught in a country of war.

Right after the experience, I ran off to my 10:45 booking for Mind at War, a VR experience about Post Traumatic Stress Disorder. I got to chat with the makers because the person before me was running a bit late, and learned one was an American who had actually heard of Northeastern University, and the other an Australian who had met the person whom their story was about while camping in America. In the experience I was immersed in a drawn (with TiltBrush) VR experience, with a narrative telling the life story of a man sent off to war who lost his wife and family because of the distance, and later lived homeless for 5 years after being medically released from the military. This story was particularly interesting to me because my Aunt who is a Psychologist was mentioning discussions of bringing VR into use to help PTSD patients, and this tied in perfectly, so I set up an interview.

At 11:30 I had an appointment for Manic VR, which entered me into the world of a few people with Bipolar Disorder. It had gorgeous graphics and a strong story arc, and really made me understand Bipolar Disorder in much more understandable terms.

Right after that, I went to interview the main man who made Mind at War, known as Sutu. He talked to me about how he just happened to meet the main subject of his film at a campsite, and the project sort of stemmed from there. He said that he hoped that this would make a difference worldwide to show how little help many veterans of war got after they were dismissed, and also hoped it would help other veterans struggling with PTSD feel like they were not alone in the struggle.

At 12:00, I checked out the Sensible Data/Mixed Emotions technology, which took a photo of my face, and from that drew my face, and guessed things such as my age (apparently 29, not the 19 years I was turning that day), and my emotion (apparently happy).

I then ventured back to my hotel room to finish typing up my critical review on Yemen’s Skies of Terror, which had changed since viewing it in a headset instead of a 360 igloo the day before.

At 14:00, I headed over to the Audience Participation in Tech talk, which included the next person I had set up an interview with. It was deeply interesting hearing what people on the cutting edge of large scale interactive media had made, and what they hoped to achieve in the future. One man, Erwin Schmidt, who I actually found very interesting, was somewhat cynical of the re-emergence of VR and if it would be successful. He also talked about his own piece’s faults (which many media makers steal away from) and talked about how the main issue with interactive media is it lacks standards and standard equipment, which common video making now had, so it was harder to mass spread the projects. He also pointed out it was hard to extract implicit feedback, which leads me to the next project I attended. 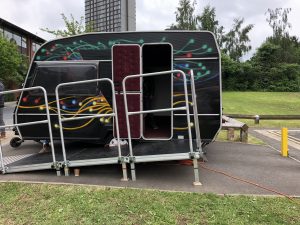 At 16:00, (after grabbing a cinnamon roll to eat because I’d forgotten about lunch) I reached a project called The Moment. I entered a room with a few other people, one who got a something attached to his head to measure his brain and affect the story which apparently had over a million combinations. The story was in some ways was hard to follow, but covered a world where everyone must think the same. After this, we were all pulled aside to be interviewed, but I had to pull away a bit early to make the second showing of this choose your own adventure film that I had at 16:45. I watched it a second time, and this time made more sense of it, since I already knew where it would end and had seen a different cut of the story. Again they pulled me aside to interview me, and I told them how it would be interesting to see which parts of the brain were firing to effect each choice and what other applications I thought this software could have.

At 17:45, I interviewed the maker of this piece, Richard Ramchurn. He explained he was getting his PhD in the subject of brain controlled interactive media, and how he had done another project before that cut when someone blinked. This project was switching between a few video tracks, and switched whenever the person’s concentration went down. He said that this was on average 6 seconds, which might tie into the fact that most cinema shots were about 6 seconds. I found his current project and his studies very interesting, and cannot wait to see more stuff with this technology.

I then went out to dinner with a few others at 18:30, and headed back to the hotel.

A bit later a few of us headed to a pub to meet with some local Sheffield students who had invited us all to join them, but unfortunately could not find them so we grabbed a second dinner right before pretty much all food closed at 21:30.

at 22:00, we then headed to the famously disgusting Corperation, which apparently was a “must see”. Given the small group we walked up and met some local college students, who introduced us to all sorts of people who were apparently just friends for friends, and they explained that most everyone in the city knows each other, which spoke to how friendly Sheffield was. We made it back to the hotel just past midnight, and passed out after such a long and exciting day.