In the morning, classmates gather together in Premier Inn’s meeting room for confirming assignments requirement for the rest of time, and then dismiss. 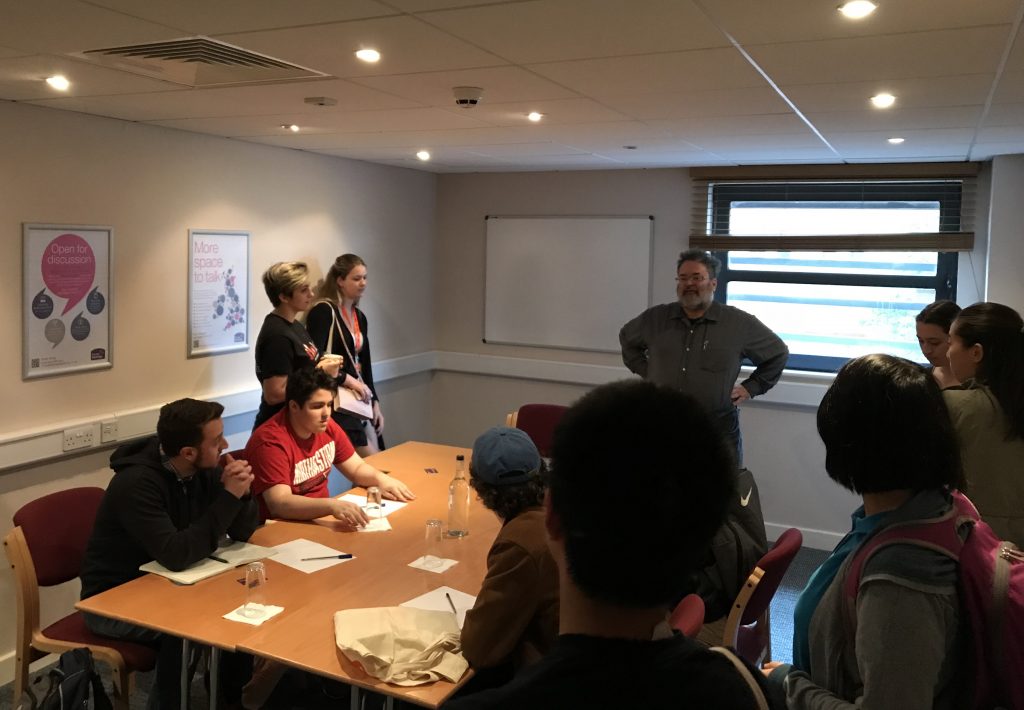 I walk to the AKA The Warehouse — Trafalgar Warehouse for booking Terminal 3 and Mind at War. Unfortunately, programs put off to after 5 p.m., so I turn to other venues to feel the festival’s atmosphere, ant to enjoy good works.

In Tudor Square, DOUBLETHINK leaves me the first impression in this festival. Filmmakers Iain Forsyth and Jane Pollard made two different videos — Hate and Hope, audience can only choose one to watch. First, the staff stamped on my arm with a word — HATE, before I enter a container named Hate. After coming out of the venue, one of the volunteers tells me that I can hide the HATE stamp to experience the HOPE if I want. To be honest, I totally cannot understand what idea the videos want to convey to audience. George MacKay, who is the only actor in these videos, provides provocative, exaggerate and hysteric style performance which is so eye-catching that I think he boosts a set of not so interesting movies.

Nearby the containers, 360 video Sanctuaries of Silence is playing inside a small tent. This documentary is made by Emmanuel Vaughan-Lee and Adam Loften, which is last for 8 minutes and worthy to watch. Presenting a reflection on noise pollution, an old man, Golden Hampton compares urban city’s high-decibel noise with Olympic National Park’s sound, and the latter is one of the quietest places in North America. At last, it leaves a message for audience: when you listen, you has to be quiet, which is a simple but hard to follow motto in city’s life.

30 seconds passes, the 360 screen turns to We’re Still Here, depicting a Two-Spirit artist and historian in Idaho how to preserve and revive his heritage. What attracts me is protagonist’s ambition to protect his heritage, however I do not think this film needs to use 360 screen because my eyes solely focus on his narrative whilst the surroundings are normal.

My phone reminds me to see Brain control Movie in Howard Street. On the way, I meet with Amy, and experience one of the World Premiere films — The MOMENT. The plots make both of us feel sleepy, but the principle does fascinate the audience including us. A controller is wearing a head control device whilst watching the video, during the process, the ongoing scene will jump to another one if he does not lose attention. The sequences of storyline can be controlled by audience is really an interesting and potential effort in film industry. 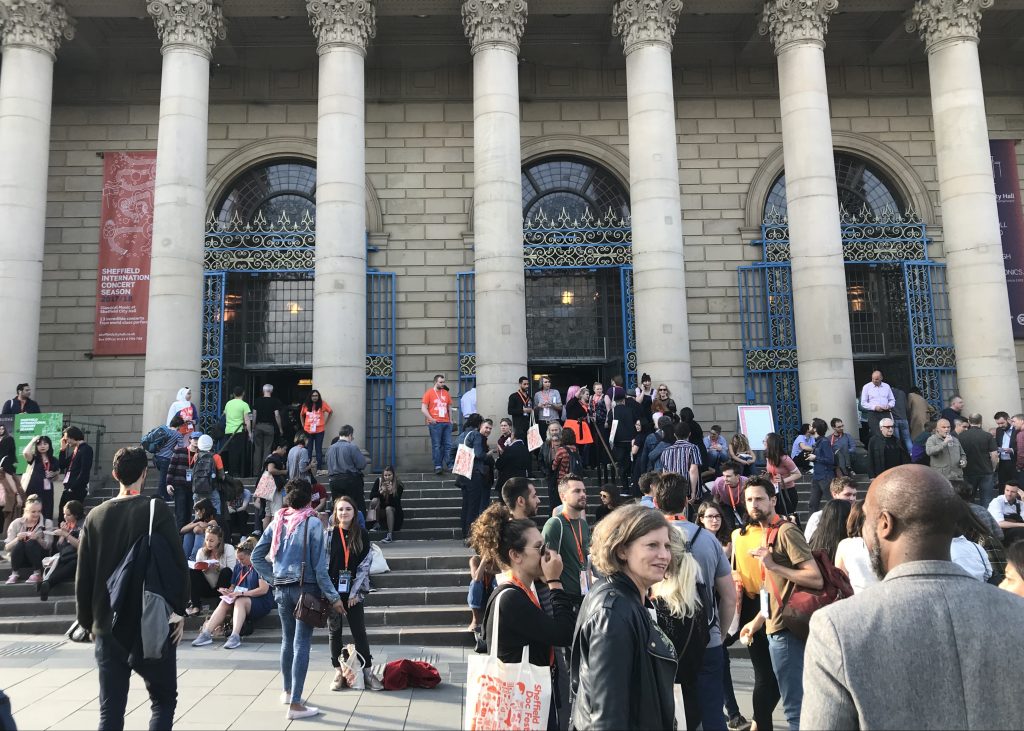 The crowd are waiting for the festival’s opening outside City Hall. Photo by Ronnie.

Times flies. Opening Night starts suddenly at 6:45 p.m. Crowd are cheering, applauding, yelling to celebrate the 25th Sheffield Doc/Fest. As the speaker ends his speech, A Northern Soul starts, which is a film about changes to Hull where hit by cuts in public spending and divided by Brexit by presenting several people’s lives in the documentary.

Sean McAllister, the director of A Norther Soul, met and started filming with Steve Arnott, a struggling warehouse worker by day and hip-hop performer by night, and supports his own creative dream. From Steve’s story, audience are aware of how people’s lives change and struggle due to Brexit and make people reflect on a new policy can lead to tons of impacts on both country and residents that should be careful enough whilst making decisions.

End of the day, I gain new thoughts on alternative realities as well as storytellings, inspiring me think of how new technology and new idea combine with storytelling, what I am able to do in seeking new way in the future. To short, I am eager to watching more VR applications and chatting with people with great idea in the following days.

A Northern Soul is produced by Elhum Shakerifar and Sean McAllister for BBC Two, with support from the BFI awarding funds from the National Lottery, Joseph Rowntree Foundation and Sharp House.