Our project is all about a distressed Toronto that is miserable with the absence of Aubrey Graham, better known as Drake. The team members were Arielle Bishop, Connor Marquez, Erin Mittmann, and Ricky Coelho. We worked together to craft an entertaining and interactive virtual reality project. 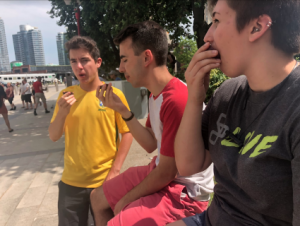 The group happily ate the passionfruit after we were done with our shot.

Our story begins with a Toronto in dismay as the user realizes that Drake is missing. The user interacts with the world by listening to audio cues that hint at what items to look at and these items take the user all around the city of Toronto. Drake has had a major influence on the culture of Toronto and if he went missing, Toronto would not be the same.

Our target audience are the fans of Drake that have grown up listening to him and have seen his rise to stardom. We also think that the citizens of Toronto would appreciate the satirical nature of this project.

The audience will be entertained by our project and hopefully leave the experience with a smile on their face. We also hope that they will feel engaged in the project with the interactive component of the items we hid for them to discover.

The 360 video technology allows the user to become fully immersed in the story. They are transported to a Toronto that is not in a unique way that no other technology would allow. This technology also gives us the ability to make the experience interactive. The user will help find Drake in order to save Toronto. 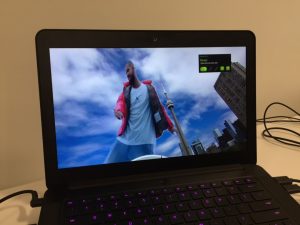 This was the end of our project that shows Drake dancing in the Toronto skyline.

Our original idea was to have a user stay in one spot and let the world move around the user with no actual interaction. We then iterated that idea and decided to include user interaction that would transport the user all around Toronto. The final iteration involved us figuring out the best way to incorporate hints in our interactive video. We decided that playing Drake’s songs would be the best way to guide the user towards the items that will trigger the next scene. The group realized that iterations in a project help improve the project dramatically. We also noticed that with each iteration the changes made were less drastic and more focused on fine tuning the bigger picture. 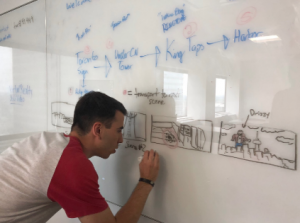 We mapped out the most efficient way to film our video and what shots we thought were the most important.

We would like to take the user across different parts of Toronto and incorporate more options. Our project right now is very linear, but it would be a fun addition to include some dead ends that actually weren’t right. This would make the project feel even more interactive and would promote user engagement.