Nathan Phillips Square is one of the most famous landmarks in Toronto. For tourists and residents, it is a good spot for leisure, taking photos, and filming. Despite its popularity, the square is also very concrete, and has a lot of room for growth.

The story presents a discussion with a mother and her daughter about what kind of Nathan Square they want to see. In the prototype, we use doodle animations to depict their imaginations, which overlay a 360 image of the square.

Our project displays how a good place can be made even better with human imagination. The square serves as a canvas, and gives the subjects a unique opportunity to use their creativity to envision a better place. Our story serves as a unique medium between humor, as seen with some of the little girl’s silly, unfeasible answers, and the serious proposals by the mother. 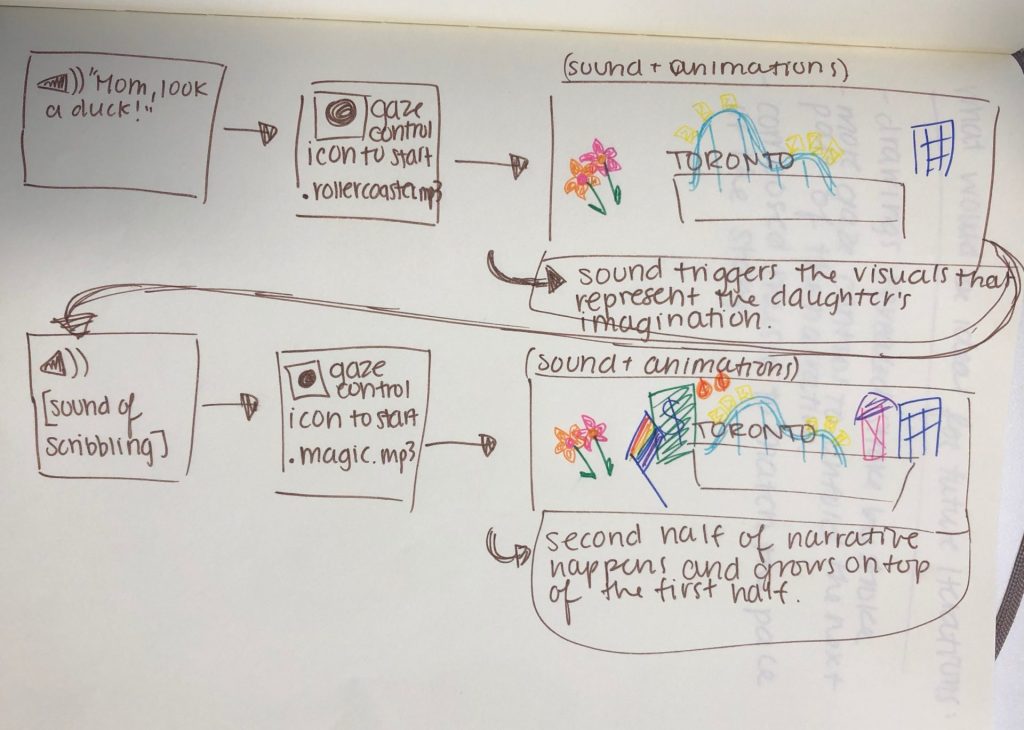 This is the flow of how we wanted our program to behave, taking the user through the series of ideas and animations, with time in-between the videos to look around and reflect 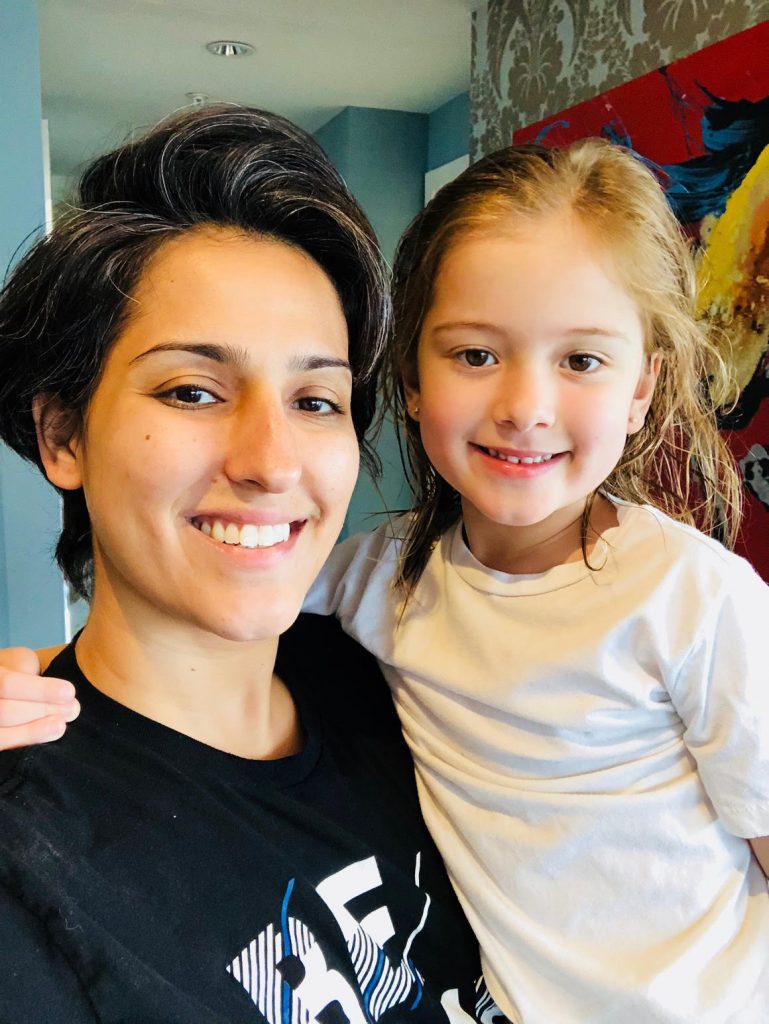 This is the picture of the mother and daughter, Marium and Ava, we interviewed

Our target audience is very flexible, and spans over a wide range of people. This program is really good for young kids looking to use their imagination, and is an easy, effective way for them convey what they would like to see change. Our project is also designed toward adults seeking change for a public place. Overall, the project would be most effective towards people who spend time in the given public place.

This project can also be a useful tool for policymakers and city leaders. Rather than hearing about changes, our project can actually show them how a place would be improved, and could make them more inclined to accept or even support changes to a public space.

This program gives those who spend time at Nathan Phillip Square a unique perspective of the space. They are able to see a new, animated version of the square, while still being able to experience the existing features.

This project shows the different ways people can consider development of the square or even the whole city. What do people need? What do they want? What do people fight for? At the square, people might want a variety of things, possible and unrealistic, including more grass, a roller-coaster or flowers. Our VR project does a really good job combining the many different community perspectives and opinions, and allows people to visualize all of them. Our project also shows that trying to change the community does not have to be a chore; rather it can be completed in fun, interactive, and creative ways.

This project works perfectly for virtual reality because it allows the user to see and experience how a place would look. Rather than just bearing about how a place would look, being able to see animations in an interactive setting would provide great perspective to how a place could feel after a transformation. In any public place, people may not see reason for change, but being able to see people’s views through the animations will provide different viewpoints and opinions. 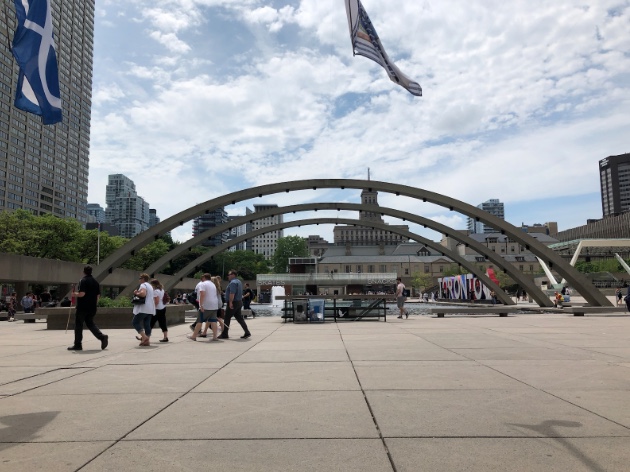 Upon arriving at our location on Friday, we immediately realized how perfect this space would be for our project due to all the concrete and open space available to us

When discussing project ideas, we wanted to do something fun and creative. Our first idea was “Toronto Underwater”, which could be achieved by using a filter to make it seem like the entire city of Toronto was underwater. However, we also wanted a project that could connect with the community, and were not sure that this initial project idea would effectively do that. After some more brainstorming, we thought of “Animating Toronto”, where we would take a 3D video of a public place, and augment it using animations based on what people described to us. For example, if we were at a park and someone said they would like to see a dinosaur, we would add an animation of a dinosaur into the video. We really liked this idea because while we thought it could be a fun and playful way to interact with the community, we also thought we could get some more serious answers that could reveal perspectives of the community and possibly encourage change.

We filmed at Nathan Phillip Square, which unintentionally ended up being perfect for our project: due to the concreteness of the square, it almost served as a “canvas” for us, which allowed us a lot of flexibility in our animation designs. We were able to continue our iteration process even while gaining assets. Our initial plan was to collect multiple interviews, and place the best ones into our project. However, we had one interview with such fantastic perspectives from a mom and her young daughter that we decided to solely focus on this interview.

We initially decided to use EEVO for our project. After our Skype meeting with Harris Friday afternoon, we thought that EEVO would be perfect for our project, as it was straightforward and had all the capabilities that we needed. It would allow us to drag hotspots into specific locations that would trigger videos and audio. It also allows spatialized audio, which would help us in matching the audio to where the animation is being sketched. However, due to a bug with the EEVO program, we had to switch over to Fader, which still allowed us to do basic transitions between scenes using gaze control. 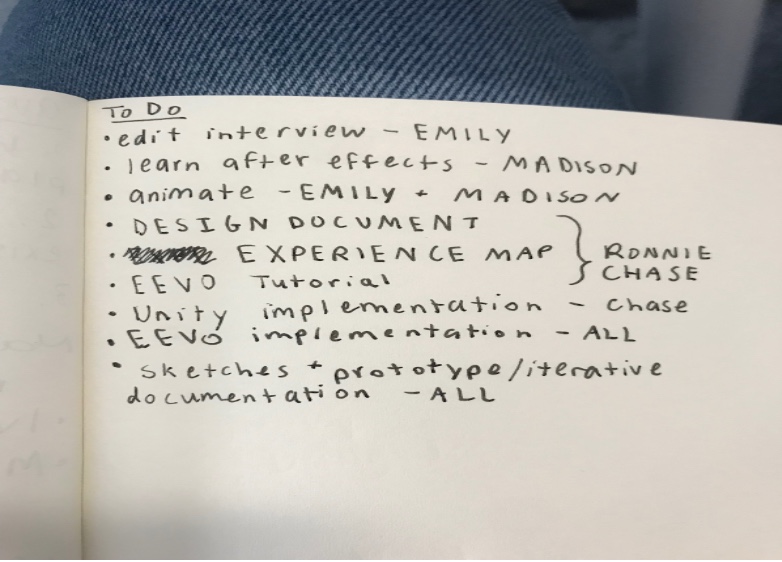 One of the factors that worked to our advantage was our organization. We had a
specific day-to-day plan. Friday would be spent collecting our assets, Saturday would be
spent editing and working on the document, and Sunday would be for any last-minute
adjustments. In this detailed list created by Emily, we were able to effectively distribute
responsibilities, which gave our work on Saturday a strong sense of direction 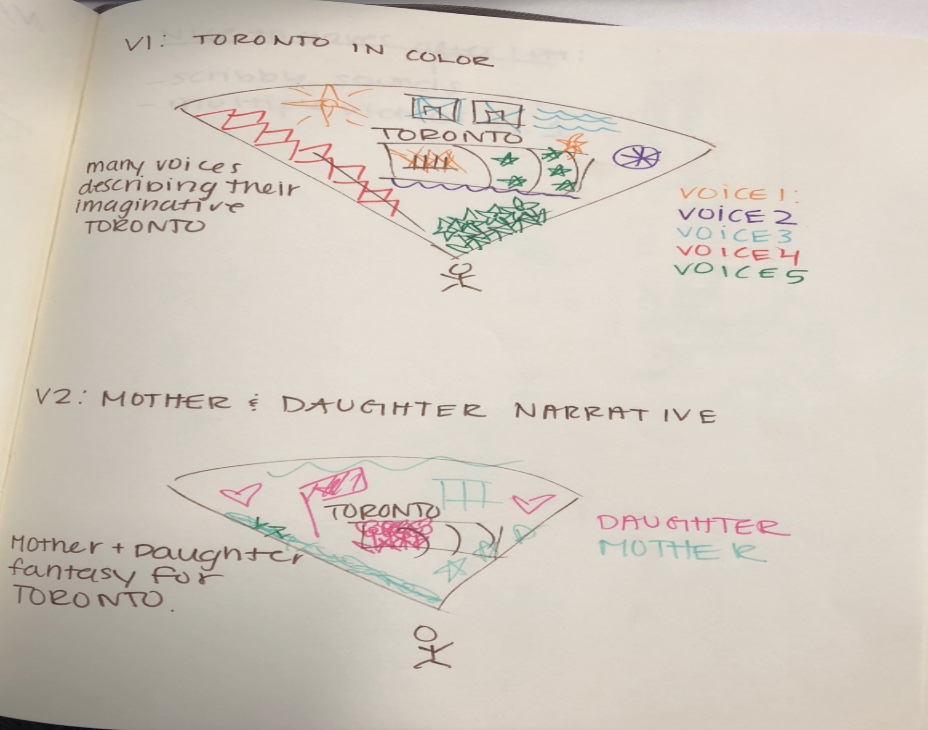 After planning to include multiple interviews, our interview with the mother and daughter was so interesting that we decided to focus on that one

Preliminary sketches of how we wanted the animations to look 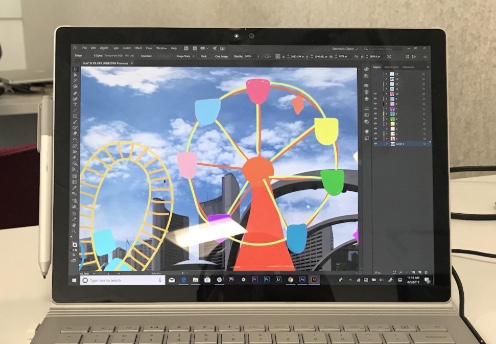 Putting our sketches into the computer, we were really happy with how the animations came out, thanks to Emily’s impressive artwork 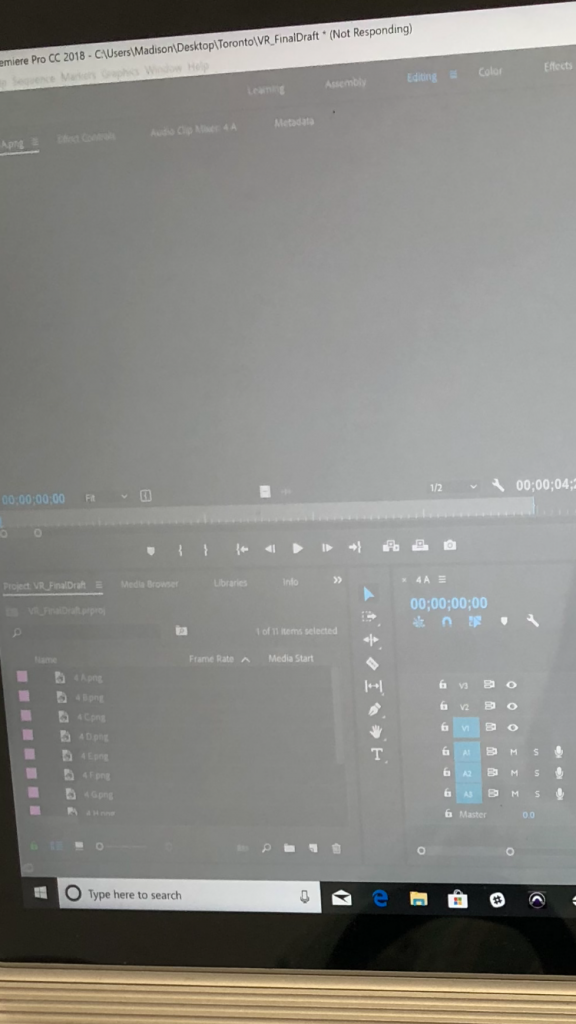 Despite our successful end product, the process was not smooth sailing, as it was often marked by software and computer difficulties

taken in a variety of directions. For example, we could do similar versions of this project

for other public places in need of enhancements, such as parks and schools. Also,

rather than just using sketches to represent ideas, we could design more detailed

spaces could be a great way to pitch public area projects to city officials. Showing them

would be so much more powerful than simply describing how a place would look. Using

the Animated Toronto project is not only a good idea to combine community ideas, but