On the final off day in Toronto, everyone had their hopes set on something. Whether it be plans that were missed the previous week, plans that people had their eyes on for a while, or things that just kinda popped up, everyone did at least something.

As for my day, I got a bit of a late start. I woke up at around 10 and didn’t get out and about until around 2. Normally this would set someone back a lot, but today, I only had one goal in mind; to hit up a board game store and see what they had. I grabbed a quick bite to eat at Blaze Pizza, and took a hike up Yonge Street to a store called 401 Games. At first, it just seemed like a narrow corridor with some basic games and collectible cards. But as I walked further, their full selection was revealed. Games were lined up, shelf after shelf, neatly organized A-Z. I found a bunch of my favorites, some games I had heard about, and some that I saw at that store for the first time. Near the front of the store, they had a game called Ice Cool on display, and let me tell you, it was pretty darn cool! I had heard about this game from a friend back home, but seeing it set up in person has built up a lot more hype for me. Luckily, Northeastern’s board game club plans to get it for the next semester, so I didn’t end up buying it. Instead, I bought a couple favorites from this past year. I bought Love Letter, a simple card game where players draw and play cards in an attempt to eliminate other players. The other game I bought was Letters from Whitechapel, a much heavier game where one player plays as Jack the Ripper, killing one maiden each night then attempting to escape the police, aka the other players. After I bought my games, I left the store and relaxed at Ryerson for the day. 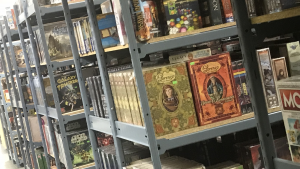 Other people did some more interesting stuff than I did. Jason, Erin W, and Liam went to the Ontario Science Centre, which was a mandatory field trip turned optional. From what they said it was a fairly enjoyable experience, but definitely a long walk in the heat. Erin W, “would prefer more interaction, but that’s just [her],” and she “preferred the Boston one.” 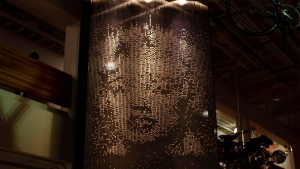 Also, Arielle and Erin M decided to go to the CN Tower. They got to get a good view of the city over a nice meal on a rotating platform. They found it somewhat touristy yet still enjoyable. Arielle said it was, “worth the price.” 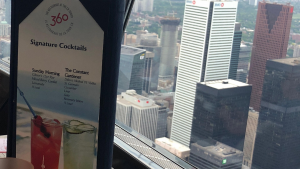 After a day of various activities, everyone hopefully got enough sleep, and looked ahead for the home stretch of work in Toronto. After registering for Sheffield events, and with our departure only three days away, we look to wrap up our VR projects and await whatever is in store for us at the Sheffield Doc Fest.