Day 15: The Moment We Were All Waiting For

Day 15:  The time finally arrived.  After seeing it in action in the House of VR, we finally got our chance to make our own 360 videos.  The day started as any other did.  I woke up to the sound of my alarm, the  Secret Area Theme of Battleblock Theater, snoozed it three times, before crawling out of my bed a whole 50 minutes after the initial alarm.  That is pretty good for my standards.  After breakfast, which was some french toast and apple juice, I started the long trek to First Canadian Place, accompanied by the music of Jethro Tull.  Blasting Thick as a Brick in my ears, I made it to the 46th floor of the large, white building.  There, we were greeted by a large set up for an event hosting the president of Northeastern, Joseph Aoun.  I actually was quite flustered when I saw it, thinking that there wouldn’t be class here and I screwed up and needed to go back to Ryerson.  Thankfully, I saw Liam come up right behind me and dismissed my worries as another paranoid anxiety attack.  Anyway, I got to the classroom and waited.

Finally, it was time to begin!  We started with an intro to 360 cameras before being greeted by the lovely and small Ricoh cameras we were using.  we got a rundown of how to use them and went off to film our 360 videos.  Each group of 4 was given a different guideline of what to film.  Ours was “Still and Kinetic.”  Moving and not moving.  We headed down walked around First Canadian Place, taking videos in and around the area.  We also took some accidental candid 360 pics, like the one shown below. 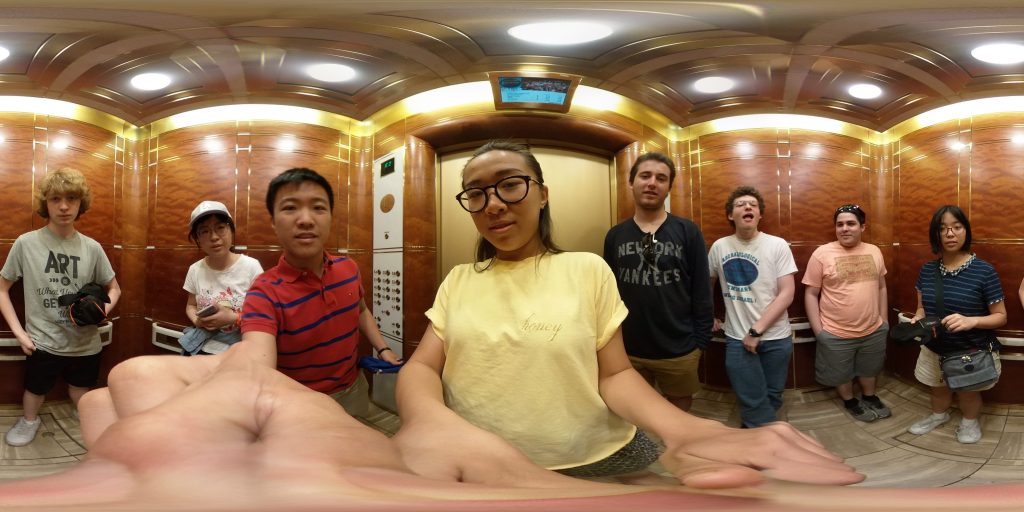 On returning to the classroom, we shared our 360 videos.  As ours were “moving” videos, we caused many headaches and stomach aches.  It wasn’t my idea to spin the camera around, if I remember correctly…

Moving on, after sharing slightly nauseating videos, it was time for lunch.  I’ve been trying to eat at a different place in First Canadian Place every day, so today, I went to Ruby Thai with Erin Wang.  We both got soup.  Interestingly, since neither of us had been there, neither of us knew what to expect when ordering.  It was a mixture of confusion and chaos that ended with wonton soup with a huge slab of tofu.  It was delicious, albeit confusing…

After lunch, we broke back into groups and filmed more based on another theme.  Ours was surprise.  We did some strange stuff, like hiding behind the camera, grabbing it and threatening it out of nowhere, and my personal favorite, shoving it into our classmate’s faces.  From then, we went back to the sharing station.  It is at this moment that I’d like to mention that the Ricoh actually has two lenses, which is how it takes the 360 shots.  When you open the video in the designated software, it “stitches” the two shots together, forming one image.  For some reason though, my computer refused to stitch them.  It’s a problem that still confounds us.  Thus, I was completely useless in that regard.

After this sharing, it was time to head back home.  Class ended early because Aoun was coming.  I went back to my room, did nothing, got a shawarma, did some more nothing, eventually did online karaoke with some friends who seem to love it when I do it, and finished off the day in the best way possible:  Memes.

Thank you for reading.