8:00 AM. My alarm starts blaring. I’m debating falling back on the bed for 5 more minutes, but then I notice the alarm message I left for myself: “Wake up, idiot. It’s blog day. Pay attention.” My morning brain takes an extra moment to process this information, and then I grab my things and head for breakfast. I need to be awake today.

I’m not sure what to expect today, since yesterday was mostly getting acclimated with 360° video, and I’m still not totally comfortable with it. I reach First Canadian Place, and make my way up like every other day. I wish I could say that I enter the classroom for a wonder-filled, extraordinary day full of excitement, but that isn’t really what happens. Today is another info-heavy day, not that that’s inherently a bad thing.

Professor Tamés starts by explaining to us, as he puts it, “30,000 Years of Alternate Realities in 30 Minutes”. To his credit, he actually does finish in around half an hour, and the presentation is very comprehensive. The presentation touches on everything from prehistoric cave paintings, to Michelangelo’s Sistine Chapel fresco, to early prototypes of modern VR headsets. I had never thought about how far back we can consider “altering reality” to go, but I see now there is a lot of history to this concept.

More presentations go by, less interesting than the first if I am being honest. It’s a lot of “things you can do in this new storytelling space” which are obviously good to discuss, but I sit there feeling as though I have heard these same thoughts echoed several times already on this trip, and would rather now jump in and actually try working in said space. 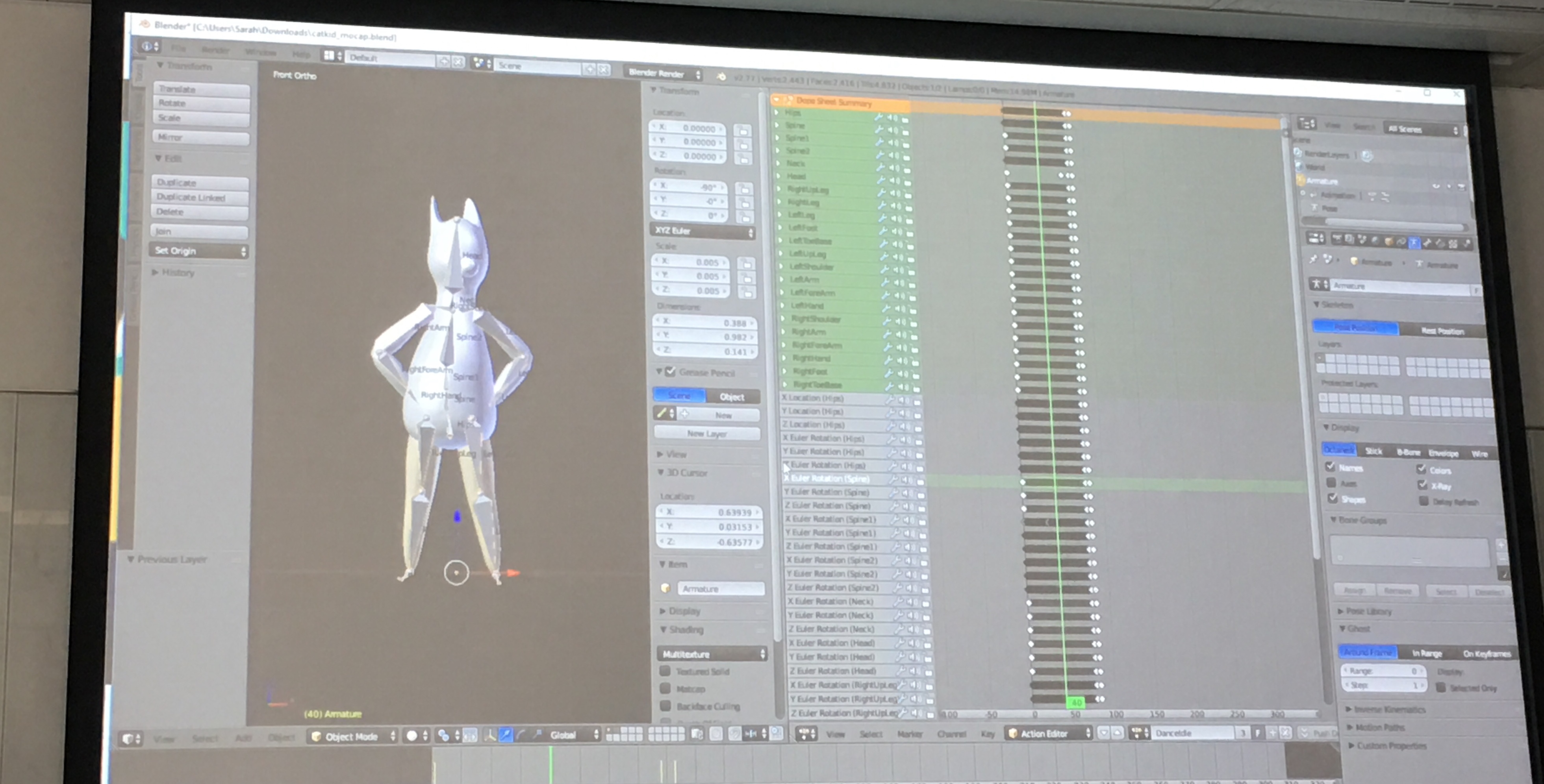 Sarah Babski shows us work she has done on AR/VR-related co-ops.

My interest is regained, however, by Sarah Babski’s presentation. Her presentation feels a lot more personal to me, as she discusses how AR/VR co-op programs tend to go, and what kind of things we can expect from them. It was short, sweet, and felt very relevant. I thoroughly enjoyed it.

Come lunch time, we would begin to get back to some of that “jumping in” I had wanted earlier. I sit down with my new project group, and we discuss what kind of 360° video/VR experience we’d like to cultivate. It is rather difficult to even come up with plans, since the prompt is intentionally vague, and most of us have little to no experience with the development of 360° video or VR. We end up settling on an idea, which I would talk about now but I sense there will be a Design Doc post about it later, similar to the one we just did for our AR projects, so I won’t spoil it just yet. 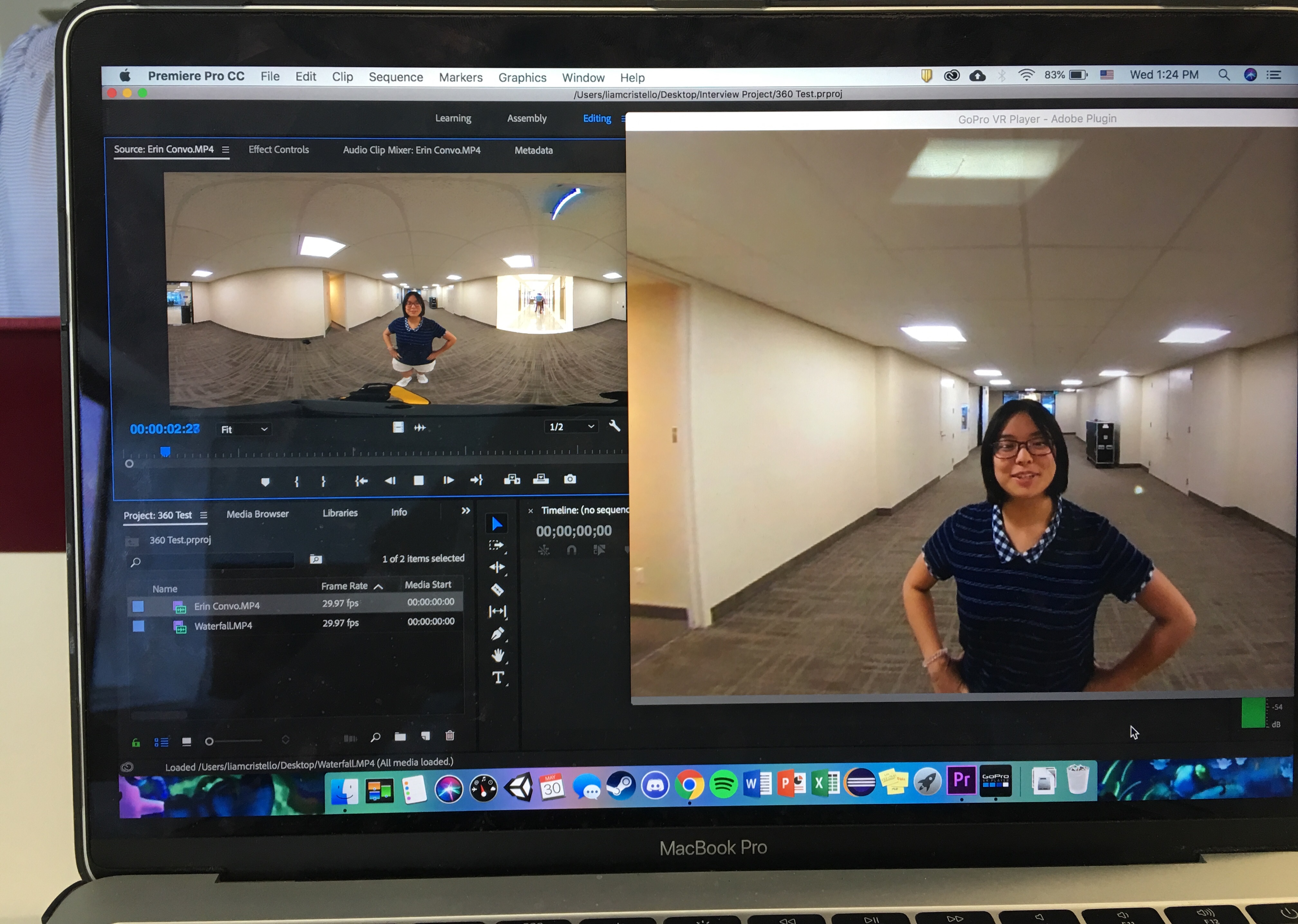 Me editing some of the 360° video I shot with my group yesterday. Special thanks to unintentional guest-star Erin Wang.

After lunch ends, Karen Vanderborght shows us how to navigate editing 360° video with Adobe Premiere. It’s not totally uninteresting, since we learn how Premiere lets you view the video as both a raw, round mess and as a more contained view, the way someone wearing a headset would see it. However, after that, the rest of it becomes “practice editing with Premiere” which we had already done at length back in Week 1. As with most of today, it’s not totally uninteresting since I learn something new, but I have to endure lots of older information we had already learned to get there, which takes me out of the experience a fair bit.

We end the day with a quick pitch of each group’s idea from lunch. We get feedback from Karen and Tamés, and know what we should now consider for the rest of this week. I’ve learned a fair bit today, but also feel tired from the sheer amount of information covered today, and the fact that not all of it was new. Review is good, but it definitely wore me down today. I walk home and debate on going out to explore for the rest of the night, but I remember tomorrow is a day off anyway so I save it for then, when I have more energy. For now, I could use some simple R&R. And no 8:00 AM alarms.