Newcomer Kitchen is a nonprofit social enterprise that operates weekly in the quaint, lively kitchen of The Depanneur. Comprised of a rotating group of 75 Syrian women refugees and its co-founders, Len Senator and Cara Benjamin Pace, this kitchen acts as both a fundraising venture to support Syrian refugees—who may not have access to a kitchen where they are settled—as well as a space for these women to have access to cook and create with each other. 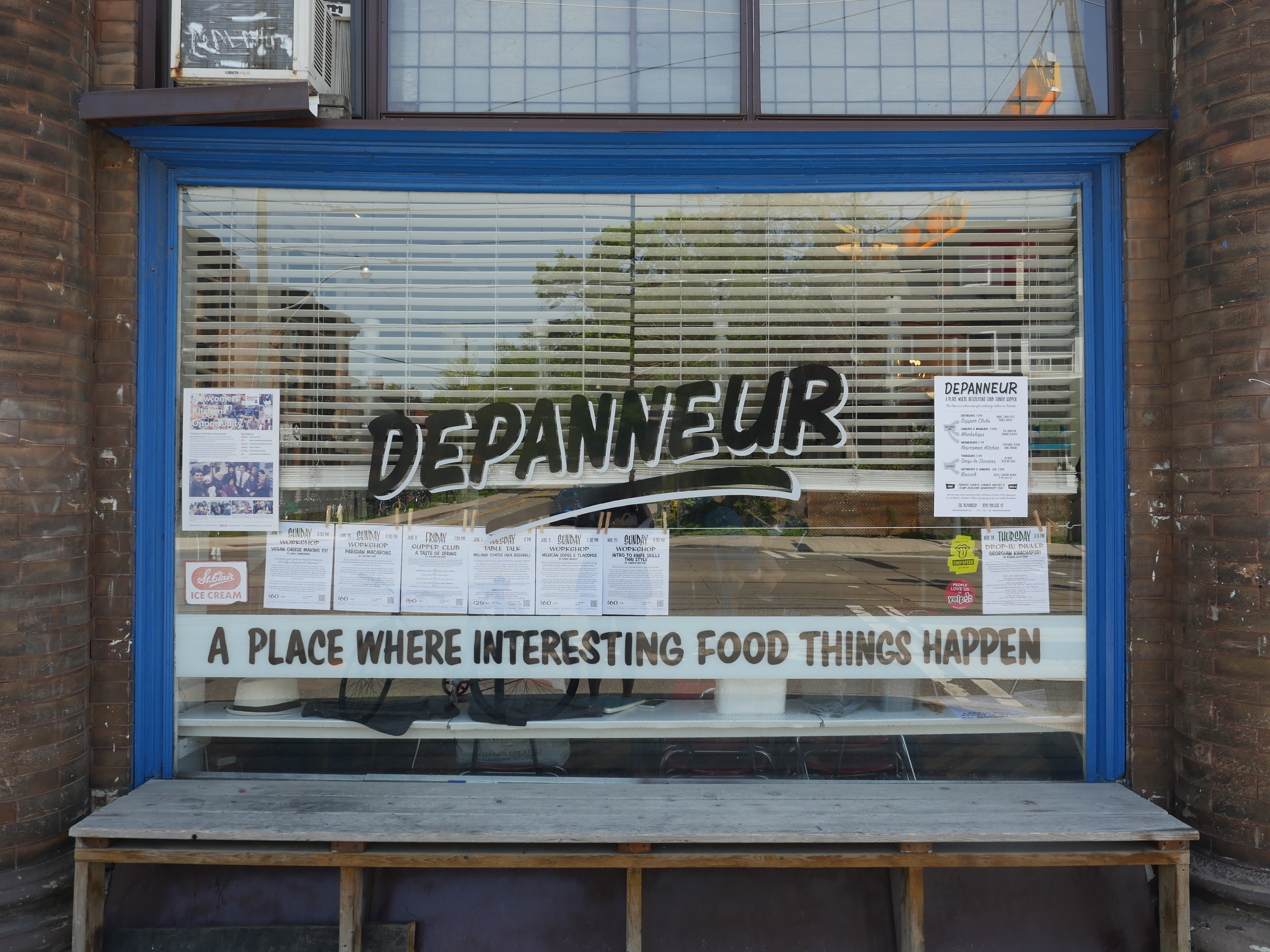 When we met Cara Benjamin Pace to discuss the project, we were surprised that she was so eager to work with us. Newcomer Kitchen is an incredibly popular organization, with world-renowned media outlets and even Prime Minister Trudeau having made trips to visit the kitchen. However, Cara was most excited about our visit to the kitchen because we were attempting something much different than any other media venture they’d seen before. Although numerous articles and even a feature-length documentary sought to bring the story of the kitchen to the public, there was still a disconnect between the food creators (the women of Newcomer Kitchen) and the food-consumers. The Depanneur is a space that contains beautiful kitchens that allows for “interesting food things to happen,” as their tagline reads, but by nature, it is not a restaurant. It allows for the magic of Newcomer Kitchen to occur, by providing the women an outlet for food creation and camaraderie, but it poses another problems as well, by creating a gap between these women and the people who order their food. The food is delivered by Foodora bikers to their door every Wednesday; they are never able to meet these astounding women or even to convey a word of gratitude for the meal. 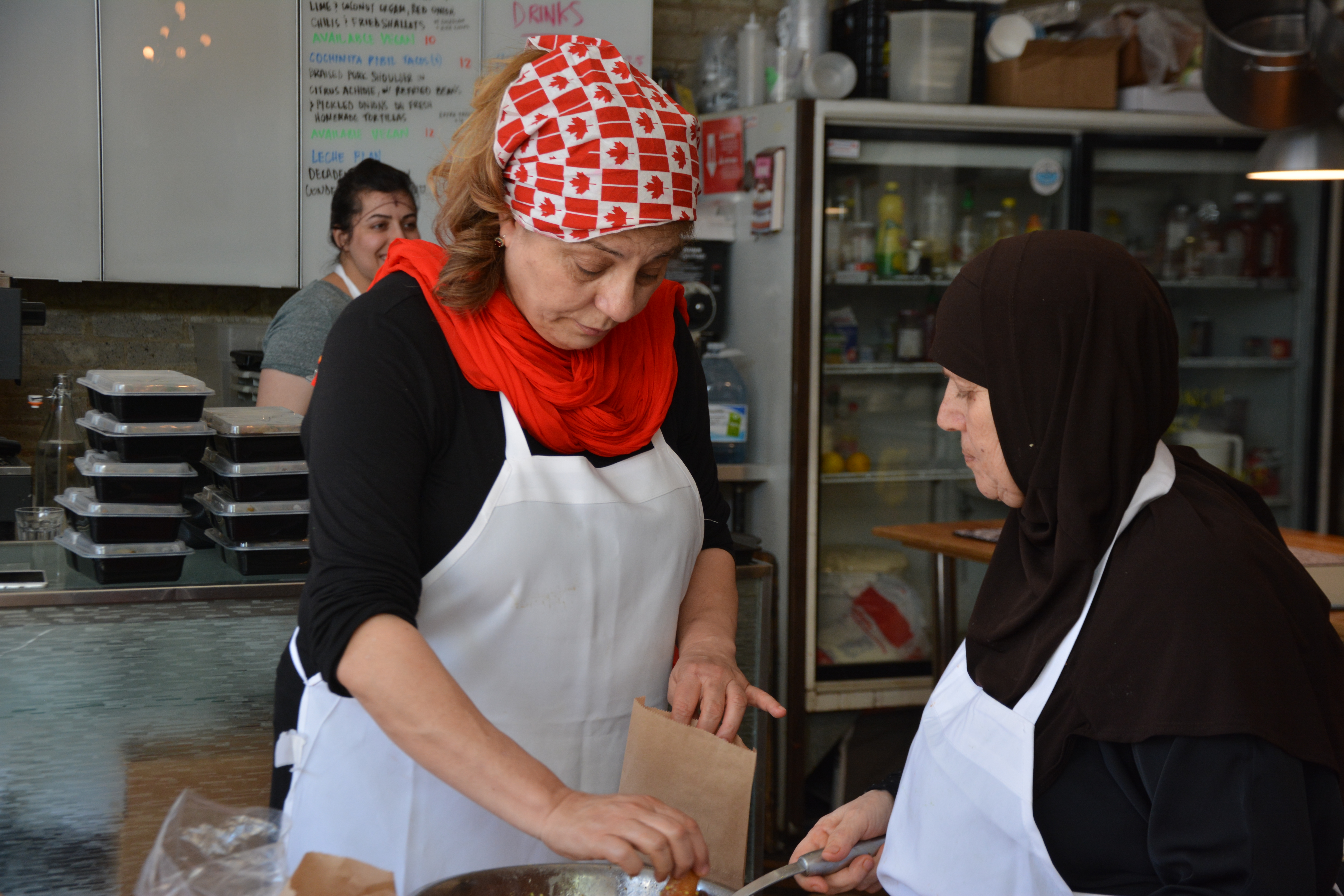 Cara proposed to us that our role could be helping Newcomer Kitchen bridge this gap. The stakeholders of this project include the Syrian refugee women, the customers, and our community partner Cara and we decided to use the unique capabilities of augmented reality to do the impossible: to bring Newcomer Kitchen to their own kitchen. We wanted to not just focus on the kitchen, or the food, or the delivery, or the consumer—we wanted to focus on all of it. In a film or article, that is nearly impossible, but with augmented reality, playing with the intricacies of space and time is viable.

The next day, we set out early to meet the women of Newcomer Kitchen during a day of cooking at the Depanneur. Despite the sometimes difficult language barrier, we were able to communicate a little through a women who was able to translate for us as we observed and recorded media for our project. Being in the physical space of the Depanneur with the Syrian women allowed us greater understanding of their motivations and unique personalities. It was such a special experience to witness, and it helped me understand why Cara was so adamant about trying to bridge the cultural gap between the women and the rest of Toronto. It was less about providing them with food and more about creating a direct connection between the refugees and the city, fostering a mutual connection and sense of hospitality. 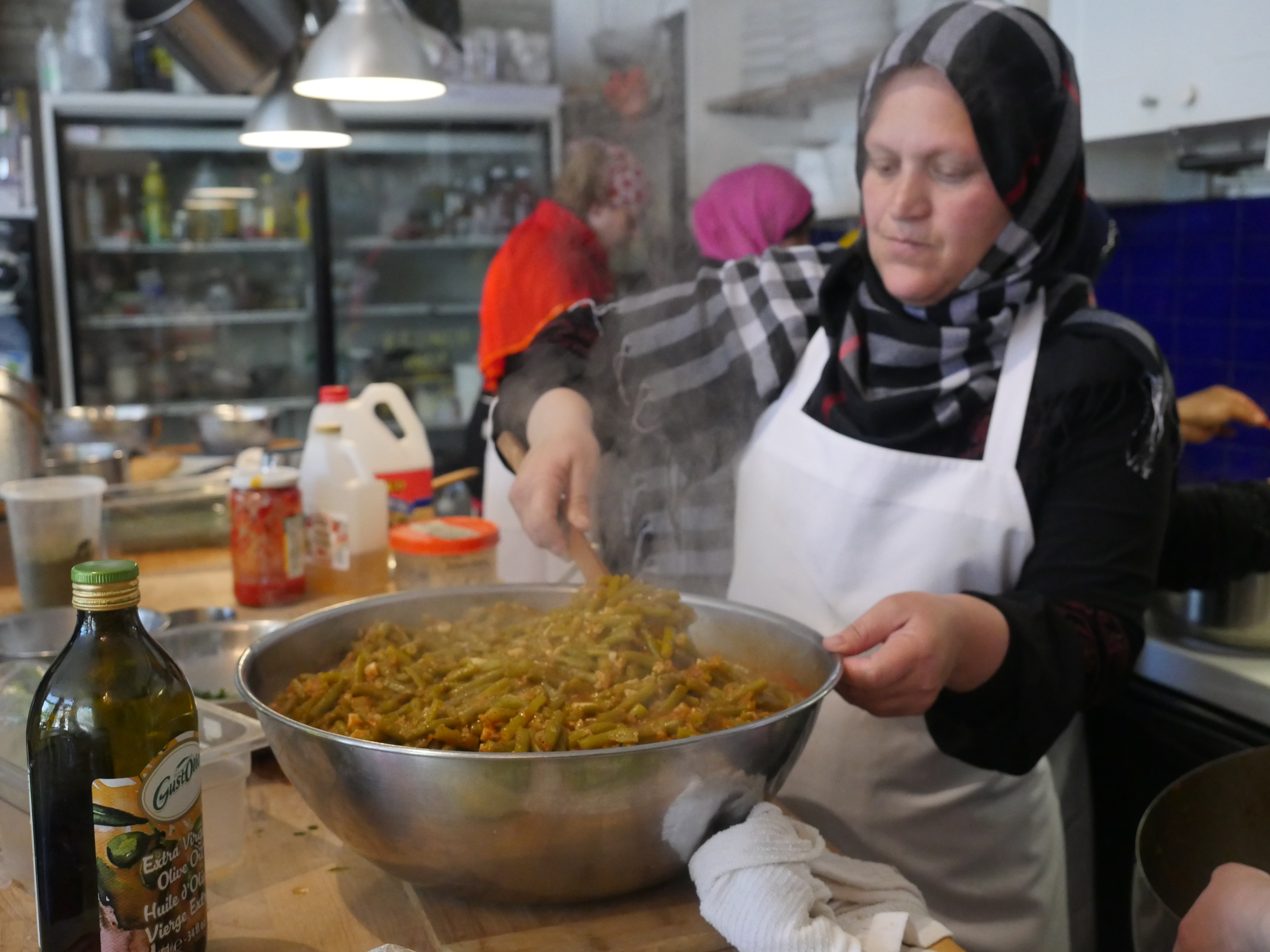 Earlier that day, before we went to Newcomer Kitchen, we thought it necessary to establish that were we not going to be invasive or ask negative questions of the women. We wanted to focus on the joy of the kitchen and pushing towards the future, not making them relive a potentially upsetting past. Considering we only had one day to visit them, we knew we had to both capture enough footage for our project as well as make these women feel at home around us. It was clear that, despite their companionship and satisfaction from participating with Newcomer Kitchen, there were still powerful memories of Syria that lingered. During our conversations with them, at one point we asked, “What makes you unique?” Many answers revolved around that they were kind and empathetic individuals, and even one woman began to cry when she said, “I think I am unique because I wish for my son to come back.” Even joyful questions and discussions could sometimes trigger an unexpected sadness and remembrance of before.

After our visit, we had a greater understanding of the environment from Newcomer Kitchen, which allowed us to spend time envisioning how we would transfer all the sensations of that physical environment into a virtual one that anybody could experience, no matter where they were. First, we created an Experience Map that combined our memories of the day with the technological aspects we wanted to consider for our app.

Then we brainstormed ideas of our ideal app using the 5 E’s once we had gone through several iterations of sketches and conversations about how we wanted to depict Newcomer Kitchen with Cara the day before.

After the initial discussions, we settled on two ideas. The first priority was using Hoverlay, an augmented reality app that allowed the user to place media at specific locations in space. Rather than attempting to use a physical location to anchor media like most other groups did, we wanted to use the proximity of the user’s cell phone as our starting point. Because the Depanneur is not a sit-down restaurant, the likelihood of someone visiting the storefront is slim, and even if they did visit, they would not be able to experience the magic of Newcomer Kitchen. We wanted to give them an experience that would be otherwise impossible. So via Hoverlay, we would bring them the individual story of each woman from Newcomer Kitchen, complete with the story of how their food was made as well as the story of the women themselves.

Our second idea was to experiment with AR Kit, a software that allowed the user to code for interactive elements that were impossible with Hoverlay’s drag-and-drop functionality. We wanted to show Cara the possibilities that existed within AR to give her a complete understanding of what she could do in the future. She had mentioned to us that Newcomer Kitchen wanted to utilize augmented reality technology but just didn’t know how. We didn’t want our demo to only exist within this summer class; we wanted to show Cara what she could bring with her into the future. 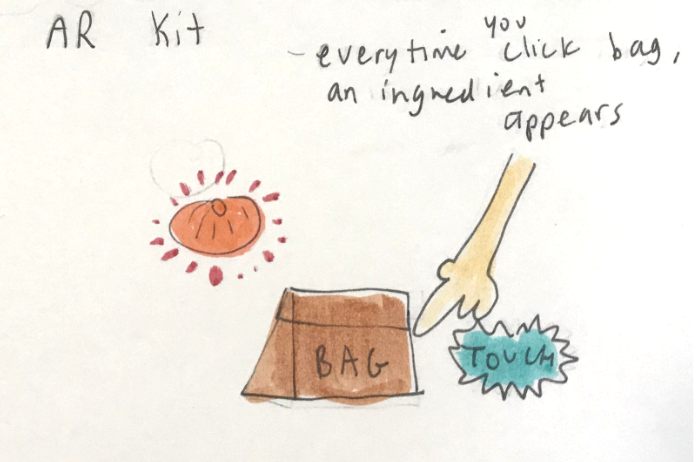 For AR Kit, we had a simple idea to create an app that would pop up a green-screen image of an ingredient that was used in the meal when the user tapped the screen. Although it was a simple idea, the execution was difficult and required many iterations and repeat attempts. Instruction and coding help from Professor Cindy Bishop was incredibly crucial; she was fun to work with and supportive of our exploration into the technical side of storytelling.

Regarding Hoverlay, we ran into some early problems due to our desire to tell the story around a variable location, not a specific physical point in space. To solve this problem, we emailed back and forth with Nicolas Robbe, the creator of Hoverlay, to see if any updates could be implemented to achieve our vision. We Skyped with him and explained our project, asking about ways to use the app to accomplish a story that used augmented reality in a purposeful way. 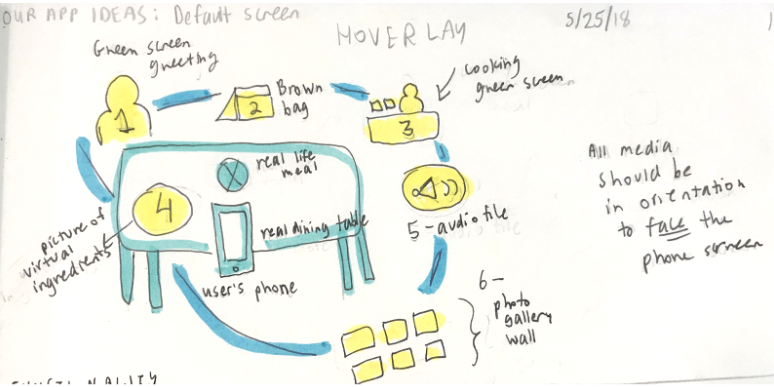 For the next two days, we created several prototypes of our Hoverlay experience, updating it each time that Nicolas created a new version of the app until we were satisfied with the result.

After Hoverlay was completed, we delegated tasks to finish our project and create a presentation that would incorporate all of our ideas and hopes for the project. Amy created a realistic 3D model of the paper bag symbol in Maya that we used in the AR Kit app.

Emily worked alongside Professor Cindy Bishop to code using AR Kit. Connor and Hulda created a sleek presentation that included information about the work we had done over the past few days as well as what the future of the app could look like. 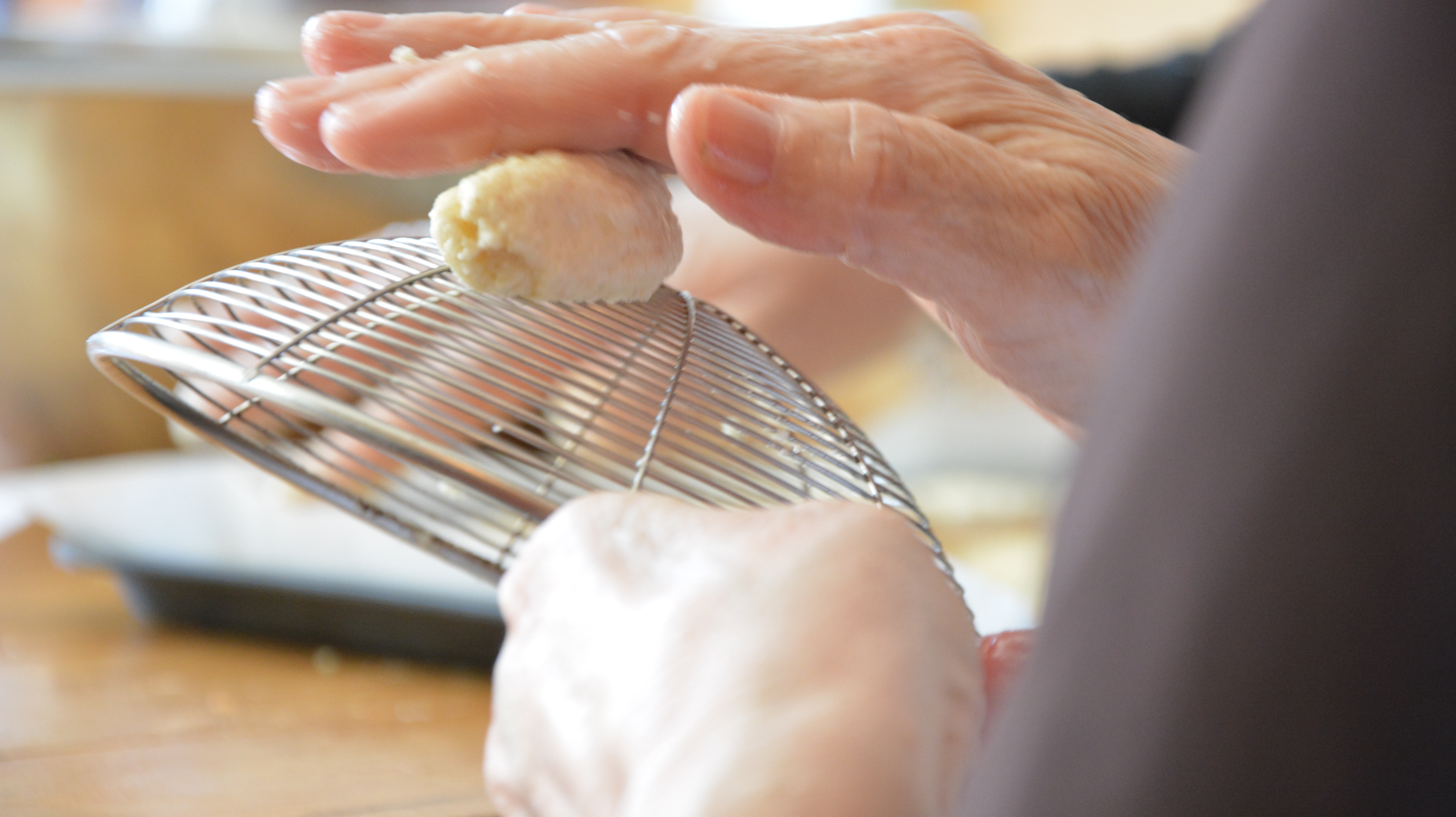