This morning started off like most others. The alarm went off at 7:30 AM and I groggily snoozed it, calculating just how much longer I could sleep if I was able to run to class at the same pace I did during my prime cross country days. I knew I hadn’t gone for a run in years, so I figured it was in my best interest to stop hitting snooze. Breakfast was also business as usual. Pancakes, eggs, some potatoes with questionable seasoning, all of the works I had become accustomed to. It was a beautiful day out on my walk to class, but it was a little too nice. Everything about the morning had been going a little too smoothly. I had a creeping sensation that something was wrong and when I got to class that anticipation came to fruition. Our email to the owner of the Lucky Penny had gone unnoticed. A call to the company proved futile as the employees were not expecting Deb, the owner, to come in at all for the rest of the day. The incredible project that the Convenience Stories boys had thought up was crumbling right before my eyes. After the morning lecture, my group met up on a table outside of the classroom. We spent 45 minutes debating what this project was going to be and how we could hope to incorporate AR into random convenience stores. We were at a loss for words, motivation, and inspiration. And then, as if the heavens above sent us a sign from an angel, the most brilliant idea dawned on all of us at the same. Let’s get lunch. 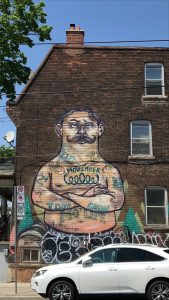 After lunch, David helped my group recover the derailed project. He told us that rather than focus all of our efforts on a single convenience store, it would be interesting to tell the story of the journey we were experiencing trying to find a replacement for the Lucky Penny. With that in mind, we grabbed a camera and hit the open road. We decided that Queen Street would have the largest selection of convenience stores, so we embarked on what was going to be a two-day adventure. We found 5 convenience stores during the afternoon journey and we focused mainly on taking photos and getting a feel for the unique atmospheres of the stores. The walk to these stores proved arduous as the hot son burned our skin and dwindled our spirits. We decided that it was in our best interest to head back to the dorms and prepare for the meeting we had with Stina, rather than fight our way through the heat any longer. 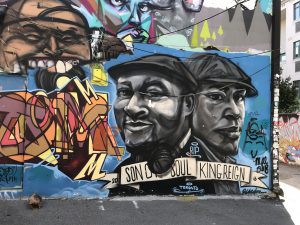 Ricky Coelho – Queen Street is home to a lot of different graffiti and street artwork. It couples nicely with the convenience stores.

The meeting with Stina went well. Similar to the walk by the convenience stores, Balzac’s Coffee Roasters was hot too. It was a little frustrating considering I had just changed out of sweaty clothes to just get mildly sweaty again, but I got over the fact quickly and focused on the meeting. Stina helped us a lot in terms of finding which convenience stores would work best for this project. She designed a map of about 22 stores that were either currently running or closed down and replaced. The map really encompassed exactly what we were trying to do with our project and that gave us a lot of confidence going forward. It turns out that the originally inconvenient convenience store situation had helped guide us into creating a significantly more impactful project.