Day 3 started off like any other: a nice breakfast and a long yet pleasant walk to the classroom. In the morning portion of the class, we were introduced to the camera and audio equipment that we would be using for our profile project. We spent majority of our time before lunch learning how to operate the cameras, which settings we needed to use, and how to differentiate between using the movie mode and the picture mode. We also learned how to use the microphone and audio recorder, and the different settings that needed to be set on the device. The most important thing, which was stressed over and over again, was that you had to hit the record button twice in order for the equipment to actually record. 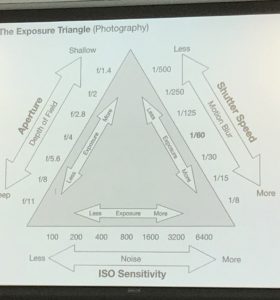 Over lunch we were told to take the camera and sound recorder and do some mock interviews in order to become familiar with both the equipment we would be using and the process of actually doing interviews. Our interviews proved to be quite …, as we were asking some pretty loaded questions, such as what superpower we would want to have and what our thoughts were on the plant that happened to be on the table. Overall, though, the practice did a great job of teaching us the basics on how to effectively operate the two pieces of equipment. For lunch, I had a BBQ chicken breast and a side of mac ‘n cheese that I had gotten in one of the shops in the PATH, which was quite delicious if I do say so myself.

The afternoon involved tutorials for both Adobe Premier Pro and Adobe Photoshop, both programs I had absolutely no experience in. Although I had no experience in operating the camera and sound recorder, the process of learning how to operate them was much easier than learning how to use Premier Pro and Photoshop. Our Premier tutorial involved us cutting and editing the mock interviews that we did over lunch. We learned the basics, like how to merge clips in order to sync audio and visual, how to cut and transition our clips, and other effects. As someone who had no experience whatsoever in Premier, I was struggling big time. But, I managed to get some help from my peers and was eventually able to not suck, so that’s good. Our Photoshop tutorial allowed us to use the maps we made during our dérives and translate them to the screen, where we could edit them to our hearts content. 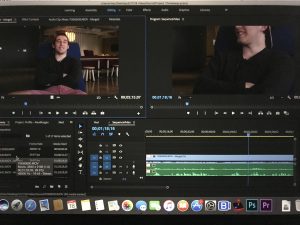 Classes our so long that after I feel so tired, but despite that Toronto is still a blast and we’ve still got two more weeks to go!