The Northeastern chapter of AIAA is all about hands-on experience. We believe in teaching new members and involving them in everything we do. No matter what their level of experience, new members can get involved in any of our projects as long as they’ve got the drive. We’ll make sure they’ve got something to do.

The first step is the basics. To help get them familiar with rocketry, we offer new members a crash-course (hopefully not literally) called Introduction to Rocketry or just “Intro.” Members of the Intro course learn the basics of rocket science and relevant physics as well as engineering practices and techniques in the construction of model rockets. They even get to design and build their very own rocket — with no cost to them. 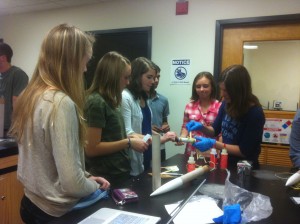 The course is centered around a friendly altitude competition in which teams of 5-7 are given identical motors and must design a motor to reach the highest altitude. It is a semester-long project in which the first half focuses on rocket science, design, and using rocket simulation software, and the second focuses on the construction of the rockets. 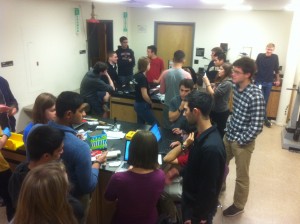 Now, we all know rocket science is hard enough; successfully building and launching the rocket is also no easy feat. It takes dedication and late night build sessions — all the while dealing with the woes of classes and the general stresses of college life. Despite this, over 45 motivated students took the initiative to stay the course and launched rockets to over 1,000 feet on November 14, 21, and December 5. Team I’s rocket even made  it to 2,535 feet — making it the highest altitude and winner of the competition. 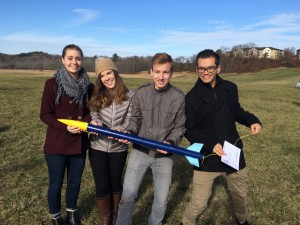 Team C with their rocket, “The Whale”

For many, the day of the launch was a highlight of the program. At each launch, the air was full of nervous excitement. The students, most of whom had never been to a rocket launch, consistently ooh-ed and ahh-ed at every rocket that flew. They hoped and prayed that nothing would go wrong in their design and lead to catastrophic failure. 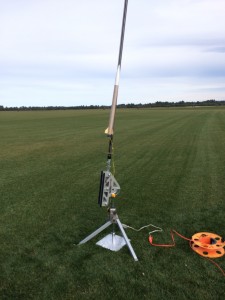 The students really enjoyed the program, and particularly enjoyed the hands-on approach that makes AIAA so special. Maxwell Vogel, mechanical engineering and physics ’19, says of the program, “It was pretty cool to design our own rockets and eventually see those rockets come to life. The day of the launch was very exciting as we saw all of our hard work finally pay off.” Max is now involved in the AIAA NASA student launch team. Another student, Kaely Gallagher, commented on the benefits of working as a team: “Being a part of intro to rockets gave me the opportunity to not only meet the new members of the club, but to brainstorm, innovate, and collaborate with them… Designing a rocket as a team is a greatly satisfying achievement.”

“We try to get them as much experience and as many skills as possible, because we know they’re the future of this club” says Harry Brodsky, an instructor for the course. “Everyone’s just really excited about rockets. It’s great to see.”